Throughout the year Americans celebrate a variety of holidays, some religious, some federal and others are considered more jovial. Then there are holidays that take on more serious side such as Memorial Day. Some people might think of this day as merely the start of the summer season or the fact that a three day weekend is coming up. Not to be taken lightly, families with children should try to introduce them to the meaning behind this and other holidays throughout the year that some Americans may take for granted. It is more than just a day where stores offer sales and discounts. There are certain traditions associated with Memorial Day and one of them revolves around the proper way of raising of the American Flag on that day. The flag should be “raised briskly to the top of the staff and then solemnly lowered to the half-staff position, where it remains only until noon. It is then raised to full-staff for the remainder of the day.” This was a new bit of information for me as it was always our family’s custom to make sure we had our flag on display the whole day. See how much you know about Memorial Day and how many questions you can answer correctly.

QUESTIONS: l. Memorial Day recognition began after which war?    2. What was the name of this day before being changed to Memorial Day?    3. What is the difference between Memorial Day and Veteran’s Day, which is celebrated in the month of November?    4. There is a certain flower that is the symbol of remembrance of Memorial Day that some people wear to commemorate the day. Can you name this flower?    5. What is the name of the poem written by Colonel John McCrae about the flower in question number four?

ANSWERS: l. The Civil War;   2. Decoration Day – because the graves of deceased soldiers were decorated with flowers and American flags;   3. Memorial Day is a day to remember people who died serving their country. Veteran’s Day celebrates the service of all U.S. Military Veterans;   4. The poppy;   5. The poem is called ‘In Flanders Fields’ 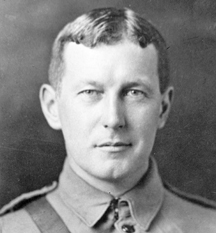 Here is the history behind the poem. Back in 1915 a young Canadian artillery officer, Lt Alexis Helmer, was killed when an exploding German artillery shell landed near him. His friend, serving with him in the same unit, Canadian doctor and artillery commander Major John McCrae was asked to do a reading at the gravesite since there was no available chaplain. McCrae wrote In Flanders Field to honor his friend and other fallen soldiers. It is deeply moving and so very sad, but a wonderful tribute to all those that gave their lives serving their country. (Right: Major John McCrae; Below: A copy of the original hand written poem.) 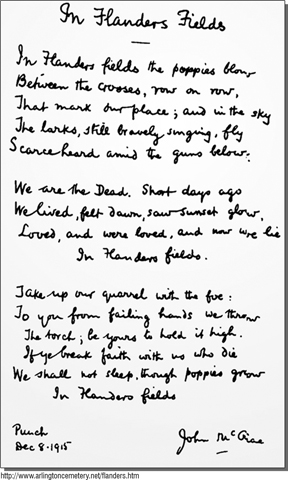 IN FLANDERS FIELDS
by John McCrae

In Flanders fields the poppies blow
Between the crosses, row on row,
That mark our place; and in the sky
The larks, still bravely singing, fly
Scarce heard amid the guns below.

We are the Dead. Short days ago
We lived, felt dawn, saw sunset glow,
Loved and were loved, and now we lie
In Flanders fields.

Take up our quarrel with the foe:
To you from failing hands we throw
The torch; be yours to hold it high.
If ye break faith with us who die
We shall not sleep, though poppies grow
In Flanders fields.