The Turtles of Town Pond

A low lying swampy area next to the South End Cemetery and first church of East Hampton, was ordered to be dug out by the earliest English settlers in 1653, to accommodate the growing number of cattle. It was eventually named Goose Pond due to the number of geese it soon attracted from the nearby Hook Pond. It would evolve into a waterhole for horses and other livestock from the surrounding farms, and even the sheep that were being held just east of Hook Mill in the sheep pen before making the final stretch to Montauk.

The name also evolved to the Town Pond and as it began to take shape, it was improved. In 1963 the bulkheads were built, but started to rot soon after and multiple adjustments were made. I was born in the early 1960’s in Amagansett, and every winter the pond would freeze over allowing the community to come out and hit the ice. It was a thick ice that held lots of people. The visual of those special days during that special time are etched into my memory. Over 50 years later, much has change at the pond, and because of its historical significance to East Hampton Town & Village, it’s connection to Hook Pond and its importance to a healthy ecosystem including the wildlife that call it home, it is being dredged of decades of road run off, decaying leaves and toxins of yesteryear. In short, the Town Pond is getting a complete and much needed restoration.

Once completed, the pond will be better than it has been in over 3 centuries. Better visually, better water quality and above all, better accommodations for the wildlife that will once again thrive there. The pond will be a clean slate, with no invasive species or plants. It’s a great time to educate folks about releasing pet turtles into local ponds when they can no longer be taken care of by the folks who buy them for pets. This is an ugly annual ritual here on the east end where summer “renters” buy their children pets to occupy them during their visit, but release them into the wild when they pack up and return home. I know this is a real issue, because I get called to rescue these animals or remove their dead bodies days after the guests vacate the rentals. Pythons, Guinea Pigs, Hedgehogs, Parakeets, the list goes on. Sometimes even domestic cats are dropped off at feral community locations. Just another sad example of human irresponsibility. 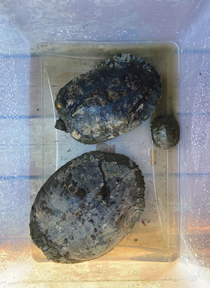 “What’s the big deal about releasing pet turtles into ponds? Isn’t that where they live?” This is a question I get often when trying to explain to folks about invasive and native species. Let me try to explain in a way that is easy to understand. So, you have pond full of aquatic vegetation. You have a dozen Painted turtles in the pond, and the vegetation supports their survival. One year, someone releases into the pond, an invasive southern Red Eared Slider male, and soon after another Slider is released into the pond, this one a female. They mate and populate the pond with their young. Other pet turtles are released into the pond over the years and now the amount of Sliders outnumber the Painted turtles who can no longer compete for food. The painted turtles health drops, they don’t reproduce, then they die off. This is simply how invasive species harm native species. The Town Pond dredging is half done and we’ve rescued fourteen (14) turtles to date (4/21). The breakdown so far confirms the results of invasive species in “real time”. Twelve (12) invasive Red Eared Sliders, to one (1) native Painted turtle, and then one (1) native Snapping Turtle. That is the stone cold reality of what happens when you release invasive pet turtle species into a pond where it doesn’t belong. PLEASE FOLKS, DO NOT RELEASE PETS INTO OUR PONDS OR INTO THE WILD. If you took on more then you could handle with ANY pet animal, PLEASE CALL ME BEFORE RESORTING TO RELEASE INTO THE WILD. I won’t scold you or ask any questions. I’ll just get the animal a proper home. Thank you. 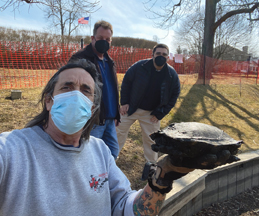 I was hired by the Village of East Hampton to do the wildlife remediation at the Town pond. There was a big concern about dredging the sediment while potential turtles could still be in their semi hibernated state. After meeting with all the local turtle experts including Karen Testa of the Turtle Hospital of the Hamptons (located in Jamesport) and Andy Sabin (SOFO), it was decided to delay the dredging for a couple weeks as the weather began warming up, giving the turtles more time to come out of the mud and welcome the spring. During that time, several did, but I felt the noise and vibrations of continued digging would probably get them moving faster, so the crew began dredging slowly and carefully while my crew kept a watchful eye. 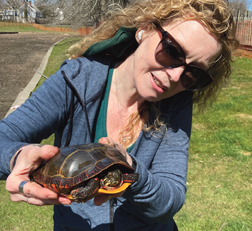 I put together a great crew of volunteers to help me watch for turtles. PJ Delia, Kathy Green, Paul Frediani, Brook Spencer, Lisa Blinderman, Bobby Gold and a number of awesome folks who were on stand-by should we need more volunteers. Together we continued recovering turtles, bullfrogs, and dozens of fish, mostly “pet” goldfish (carp) including two beautiful Koi fish. We all check the pond throughout the day, starting early before the digging begins, every hour while they are working, again after they finish and up until dusk. We have cameras watching the ponds surface and I search for turtle tracks in the mud from above with my drone every few days. The machine operators also keep a keen eye out for anything while they carefully scoop at the mud. We’ve had ZERO injuries (both human and animal) since the project started and as of April 21st, they are half way done. They are on schedule and hope to have the dredging completed by mid-May. 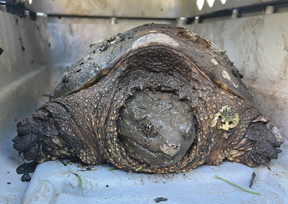 The turtles we’ve recovered so far have all been relocated. The 12 invasive sliders were either taken by SOFO Museum or placed in private residential ponds locally. The Painted turtle was delivered by myself to Andy Sabin’s private turtle pond/habitat at his home. The Snapping turtle was released in Hook pond, not too far away. It has been three weeks between recovering the Painted turtle and the last Snapping turtle, so I’m not sure what to expect moving forward. The weather is certainly warmer and reptiles and amphibians have emerged from their various levels of slumber and rest in other locations, so I don’t anticipate too many more turtles coming out of the mud. We will however, continue to wait and watch until the last bucket of mud is removed from the pond.

Bravo to the past Village board for setting up this renovation, and the present mayor and board for getting it done. And an even bigger thanks to the mayor and the present Village board for doing it right, and looking out for the best interest of the wildlife that call the Town Pond home. The NYSDEC had no problem signing off on the permit to start dredging while hibernating species were still a concern. Their best interest is NEVER the best interest or safety of our beautiful wildlife. The Village however, took the potential destruction of living animals very seriously and then acted in their best interest. I couldn’t be more grateful and proud of those folks. Other political entities should follow in these heroes’ footsteps, and learn from their actions.

I encourage everyone to visit the new Town Pond when it’s completed. Watch it evolve into an amazing wildlife experience that you can witness from the comfort of your car. Help keep it a native rich habitat, and DO NOT release animals into it. Remember, if you need to find a home for your pet turtle, call me at the number below. I’m also working on a film about the restoration of the Town Pond with lots of interesting and amazing photos, videos and artifacts collected during the renovation. Look for it on my website and on LTV and LTVeh.org. 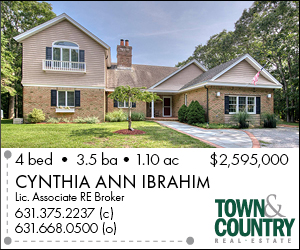