2017 is still going strong! Gee, where do I start? Just about every fishery has been producing steady action and some really nice fish coming over the rails. Some of the best shark fishing in years has been going on since June. Huge schools of Bunker and Chub Mackerel have really brought them in. The Butterfish hole and even inside of that, has been the hot spot. We have never experienced such numbers of Thresher Sharks. Back in the 80’s they were practically non-existent, never to even see one! Only the smaller ones are good to eat, if you hook up with a large one and you’re not in a tournament, take some cool pictures, and let them go. Hopefully they’ll be around for years to come. 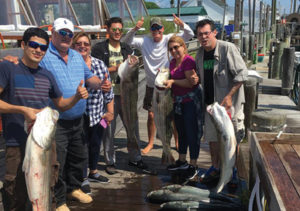 School Bluefin tuna have also been around the location of the butterfish hole too, get an early start and you can have a good chance of catching some.

Back inshore, Fluke fishing has been quite steady, with some really nice sized fish being caught. 10 pounders, 13 pounders, even a 14 pound 8 ounce beauty was caught on one of the party boats. when there is no swell, the south side is good along with Frisby, Rocky Hill, Cartwright. North rips and adjacent rips are good when the swell is on. 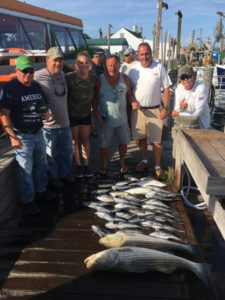 Striped Bass are hanging in there for the most part, the past 4 days (19th-23rd) has seen great action on the Elbow, drifting live eels. Hope y’all got in on that action.Thanks to the abundance of bait all around the point, these fish are staying. Looks really good for September!!

Black Sea Bass go up to 8 per person on September 1st, size limit still at 15 inches. They are still just about everywhere! When fishing for Fluke all kinds of big “Knothead” Black Sea Bass are climbing on the hooks, making for some super yummy tablefare! Porgy still going strong along the south side and the Flats.

Just keep in mind, when you’re running up for another drift, there is a lot of small boats with elderly and children on board. Fishing is great, there is really no rush going back for another drift. Everyone is responsible for their wake!!! Don’t need anyone getting hurt during this fantastic fishing season!!!