I carried the water melon…” Little did I know that I would carry a watermelon just recently at the very place where the principal photography of my favorite movie of all times, the original ‘Dirty Dancing‛ was filmed? And people that was not in the Catskill Mountains of New York but actually took place at the Mountain Lake Lodge in Virginia — other than a couple of scenes which were filmed at the old Boys Camp at Lake Lure, NC that no longer exists. However the ‘real Kellerman’s Hotel‛ is located in Virginia where the famous ‘water lift‛, most dining scenes, the beach games, Penny crying in the kitchen, and the Houseman family cabins etc. etc. were filmed. I can honestly say that from the moment of our arrival at our first visit last year, I wanted to return some day. And since we were practically in the neighborhood and we found out that it was once again a “Dirty Dancing Weekend” we had to stop there at least for lunch. Though it’s never like the first time, it was still awesome walking once again around this rustic resort like in a movie set, and sitting in Baby’s corner. 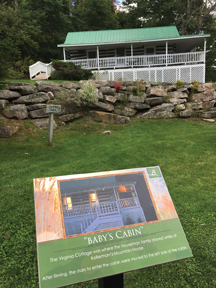 “Mountain Lake Lodge is Kellerman‛s,” Heidi Stone, the hotel‛s GM, said “It is amazing how many thousands of ‘Dirty Dancing‛ fans we meet every year. We have guests from all over the world that come to Mountain Lake Lodge just for the Dirty Dancing Weekends.” This time we recognized some French accents in Kellerman’s main dining room. This resort is located in the Blue Ridge Mountains, part of the Appalachian Mountain Range, and the center of a 2,600-acre nature preserve. The resort offers only a few Dirty Dancing-themed weekends a year where guests can see where Frances ‘Baby‛ Houseman (Jennifer Grey) met, danced, and fell in love with Johnny Castle (the late Patrick Swayze). And once again it was a sold out weekend when we visited recently.
Filming started on September 5, 1986 at the rustic Mountain Lake Lodge but was troubled by the weather, ranging from pouring rain to sweltering heat. The elderly Paula Trueman, who played Mrs Schumacher in the movie, collapsed and was taken to the local emergency room to be treated for dehydration. Patrick Swayze also required a hospital visit; insisting on doing his own stunts, he repeatedly fell off the log during the balancing scene and injured his knee so badly that he had to have fluid drained.

Delays in the shooting schedule pushed filming into fall, which required the set people to spray-paint the autumn leaves green. The uncooperative weather then took a different turn, plunging from oppressive heat to down near 40 °F, causing frigid conditions for the famous swimming scene in October. The crew wore warm coats while Swayze and Grey stripped down to light summer clothing, to repeatedly dive into the cold water.

Relations between Baby and Johnny varied throughout production. They already had trouble getting along in their previous project, Red Dawn (1984), and worked things out enough to have an extremely positive screen test, but that initial attraction had faded, and they were soon ‘facing off‛ before every scene. There was concern among the production staff that the animosity between the two stars would endanger the filming of the love scenes. To address this, producer Bernstein and director Ardolino forced the stars to re-watch their initial screen tests, the ones formerly with the ‘breathtaking‛ chemistry. That did the trick.

In the scene where Grey was to stand in front of Swayze with her back to him and put her arm up behind his head while he trailed his fingers down her arm, she could not stop giggling each time Swayze tried it. Swayze was impatient to finish the scene and found Grey’s behavior annoying. However, the producers decided the scene worked as it was and put it into the film, complete with Grey’s giggling and Swayze’s annoyed expression. It became one of the most famous scenes in the movie. ”I’m scared of walking out of this room and never feeling the rest of my whole life the way I feel when I’m with you…”

Dining in the same room where Baby threw water on Robbie‛s (Max Cantor) face? Priceless! The food at the resort was terrific and three delicious buffet meals a day, served with stunning mountain views, were included in our package when we stayed last year. To our surprise we found out that the Executive Chef was working already as sous chef at the resort during the filming of the movie and gave a ride to Swayze on back of his motorcycle down the mountain (3,875 ft) for errands.

It seems that the 2017 released Dirty Dancing remake wasn’t as successful as the original film, however, when Dirty Dancing hit theaters on August 21, 1987, it was widely expected to be a flop. The film hadn’t tested well with audiences and after the distributors let it run for a weekend, they released it to home video. But nobody was going to put Baby in a corner. The film became a phenomenon and made it one of the highest-grossing films of 1987, and made Patrick Swayze and Jennifer Grey into bona fide stars.

Jennifer Grey (Baby in Dirty Dancing 1987) turned down a role in the remake of the original film released 2017. When asked her reasons for declining, Grey said: “I was asked to do something on that show and I was flattered because I always want to be asked because it’s nice to want to be included. But for me, it would be sacrosanct for me to do it because it didn’t feel appropriate to me. It feels like if you’re going to do your own thing, do your own thing. I wouldn’t say [what role was offered] but I will tell you, it wasn’t Baby!” –I personally never watched the remake. 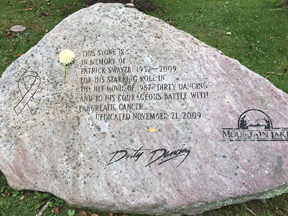 We are still in contact with some of the couples and ladies we met during our Dirty Dancing weekend last year, and their feelings are similar. All would like to return some day. We met Ericka Parkin and her husband Wes there last year and as soon as she realized through my Facebook posts where we were, she texted us all excited that she wished she could be there with us. Ericka watches the movie at least once a week. “I’m somewhat obsessed I guess, but it does feel like I’m Baby in the movie when I’m there, and I feel Patrick Swayze all over the place.” Ericka refuses to watch the remake movie.

Swayze died, with family at his side, on September 14, 2009, at age 57, twenty months after being diagnosed with pancreatic cancer. His ashes were scattered over his New Mexico ranch. www.mtnlakelodge.com.