The wild turkey could have been America’s national bird if Ben Franklin had his way. In a letter to his daughter he wrote of the Bald Eagle, being a lazy bird who would rather take a meal from an Osprey family rather than catch one of its own; however, the turkey was “a much more respectable bird”. He continued, “though a little vain and silly, a Bird of Courage, and would not hesitate to attack a Grenadier of the British Guards who would presume to invade his Farm Yard with a red Coat on.” And we all know, this still rings true but, it doesn’t quite matter who or where you are, or what color coat you wear, the wild turkey remains our most tenacious birds by far. A fine example of the results caused by human intervention of wildlife’s natural balance. 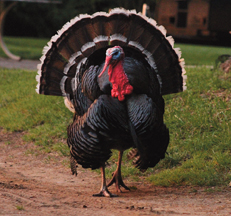 Even though the turkey is Native to North America, it’s quite possible its name came from the British who had domesticated turkeys imported from the Mediterranean which at the time they associated with the country Turkey, so that is what they called them, and I guess it stuck. In 1817 America, they were first named Forest Turkey. The turkey also played an important role in several Native American tribe cultures, not only as a great, abundant and favorite food source but the feathers were used in both headdresses and Native American cloaks. The Navajo people called the turkey Tazhii, and considers it a sacred bird. Here on Long Island, the turkey has a complicated history, and presently falls under a growing nuisance species status with no one to blame but those pesky humans.

As most of you know, Long Island was once home to an even more incredible abundance of wildlife species before humans began to arrive. This included coyotes, wolves, cougars, bobcats, bears, etc. When humans came they either pushed out or killed many predatory species that were competing for the same food sources (deer; for example). Today, deer, the once primary food source of all predatory animals that roamed the island, now exist in large herds with only one remaining predator…man. The Wild Turkey also survived the evolution of Long Island, but not without trials and tribulations.

Prior to 1992 you couldn’t find a wild turkey on Long Island, as they had vanished in the late 19th century. This was NOT due to hunting alone as hunting had been around for centuries and the turkey population was regulated, but rather a combination that included habitat loss. Habitat loss is still a huge problem today, and the cause of almost all our nuisance wildlife issues on the east end.
In 1992-1993 a member of the NYSDEC led a team whose goal was to reintroduce the wild turkey to Long Island. The reason was, “to help restore the Island’s natural habitat that existed before forests were cleared for colonial farms and firewood.” A great idea, but one that would require the entire Island to plan growth accordingly to sustain. In East Hampton alone, where growth continues to progress out of control, the idea was potential for disaster. And because no one leading the Town considered this, the DEC team went ahead and released 30 large, tagged birds from upstate New York, in the Hither Hills State Park area near Montauk. Fast forward to 2019 and the population islandwide is close to 6000.

Here on the east end, they are now considered a nuisance bird. Along with the deer, the mute swan and the raccoon, many folks are trying to find ways to deter the turkey rather than enjoy them and the beauty of nature. Mostly because of their sporadic aggressive behavior, not usually with humans directly but, more to items of/and property. I get dozens of calls each year about the turkey that continuously pecks at the rear sliding door, or the side of a car or car window. Never in 30 years have I had a call regarding a physical human attack. The window/car issue is nothing more than a reflection threatening the territorial instincts of the turkey. Eliminate the reflection and the turkey will move on. If that isn’t doable, harmlessly chasing the turkey away a few times will also send the bird looking for a more peaceful locale. Turkeys will frequent locations where food is plenty. For safety they take to the tallest of trees where they roost. This is also where they spend the nights. Although a turkey has amazingly good eyesight, it has terrible vision in the dark and must remain in a high location to avoid nighttime predators.

Here are a few interesting facts about our wild turkey. Turkeys are omnivorous, eating a variety of nuts, berries and even grasses. They’ll also eat small amphibians, reptiles and insects. Their preferred food is acorns, and like most upland game/ground birds on Long Island, they enjoy an abundance of ticks during the warm seasons as well. Turkeys do not migrate and must learn to fly into tall conifer trees safely to seek shelter from snowstorms and high winds during the winter months. Although a very heavy bird, they are very good and agile fliers at short distances (up to a quarter mile). Each turkey has 5000-6000 feathers and the male, called a tom or gobbler, has a tuft of coarse hair protruding from the chest called a beard. Males are larger than the females (hens) and weigh an average of 12 to 24 pounds. The record adult male wild turkey weighed in at 37 pounds. Immature males, one year or less are called Jakes and babies are called poults.

The turkey has a variety of vocalizations that go beyond its tell-tale gobble, which incidentally can be heard a mile away in most cases. The males most interesting sound is created by the movement of air in an air sack located in the chest. This emits a low-pitched drumming sound, hence the name ‘drumming”. The “Spit” sound is also produced from this air sack. Rumor has it, that only toms gobble, when in fact hens gobble as well, just very rarely. Male turkey mate with as many females as possible during the mating season. They attract the females by fluffing up and fanning their feathers in a magnificent display. This courtship display and dance is called “strutting”, during which the head also turns to bright colors of red, white and blue, (maybe Franklin was on to something). These colors change with the turkeys mood and both head and neck can turn completely white when the turkey reaches its most excited state. 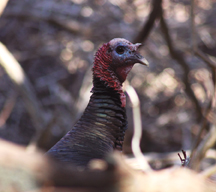 The red fleshy bags on the neck of a turkey is called a “wattle”, however the fleshy growths covering the head are called “caruncles”. Lastly, the long fleshy object that flaps over the males beak is called a “snood”. The males have a bony pointed “spur” on the back of each lower leg, similar to other male Galliformes including roosters, guinea fowl, pheasants and partridges. These are generally used in mating competition or territorial defense. To humans, the turkey is basically harmless. A favorite game bird among hunters, they prove to be quite challenging. Not only do they have great eyesight, sense of smell, and a keen sense of hearing (even though they have no external ears), but they are extremely smart and very fast runners. When they feel threatened, they retreat at high speed while keeping their body, head and neck as low to the ground as possible. And although the wild turkey is considered a gamey yet delicious meal, it is still the favored domestic bird that gets all the credit at Thanksgiving and during the holidays.

Personally, I’m a huge fan of the wild turkey. I rescue a half dozen each year, usually from vehicle strikes or fighting injuries. I had one large turkey fly through a bay window of a home hidden in the woods of East Hampton. Landed in the living room with minor cuts, and bled all over the furniture before flying back out. Unfortunately, it didn’t fair as well leaving the home and sustained more serious lacerations. I did however, manage to stop the bleeding and was able to transport the turkey to the vet, where it was mended and sent to rehab, then ultimately released. I’m sure the homeowner was as surprised to have a turkey fly through their window, as the turkey was to fly into a house while traversing in its natural surroundings…the woods.

We have the perfect habitat for wild turkeys here on the east end of Long Island. The problem is, all wildlife habitat is shrinking due to over building and poor planning. Simply ignoring this pressing and obvious town-wide issue will only make solving the issue more difficult, more impactful to humans, and more suffering for our wildlife. A challenge for those who claim to be environmentally moral, sound, astute and intelligent.

Happy holidays everyone. See you next year, and remember…WILDLIFE MATTERS!!