This is a wonderful time of year when we welcome the young, juvenile Snowy owls to our area. Photographers, eager to get that perfect photo, check all the locations that are frequented by the beautiful white owls each year. Nowadays the locations are pretty well known but photogs still insist on keeping them secret in an effort to keep them from being pestered away. I’m not really a fan of that way of thinking as these beautiful birds should be seen in their natural surroundings by everyone, and not just from photographs taken by a chosen few. Therefore, at the end of this column I’ll share a few great locations for spotting the Snowy Owl from East Hampton to Montauk. 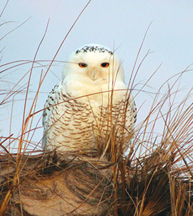 Let me start with some basic information about this magnificent bird of prey. The Snowy owl, also referred to as polar owl, an arctic Owl or simply a white owl, is one of the largest, and is the heaviest of all owl species. The weight is due to the large amount of white plumage which keeps the Snowy owl insulated in severe arctic temperatures. These feathers even grow over the beak and talons (feet and claws) of the Snowy owl like a scarf and slippers. This protection is necessary when your habitat is the brutal arctic region of North America and all of Eurasia north of the foothills of the Himalayans.

Females are larger than the males, but it’s the males who are more of a solid white. While the females, like both male and female juveniles, are marked with dark brown flecks over much of their bodies, only the males fade away to a pure white as they mature. Snowy owls are carnivores, and much of their breeding and survival depends on a particular critter which they consider priority prey. That critter would be the rodent-like Lemming of the arctic tundra. Snowy owls literally control their population while in turn, the Lemmings are a staple of survival to the arctic owl. If the lemming populations are low during the Snowy owls breeding period, the owls may skip breeding that year. It’s a very important relationship between predator and prey under extreme weather conditions. 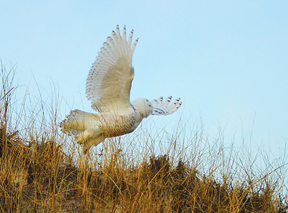 Most owl species are nocturnal and sleep during the day. This is not the case with the Snowy owl who is diurnal and quite active during the day, particularly during the arctic summer. They also hunt at night if necessary, but more often during the dusk and dawn hours. Their eyes are a bright yellow, with striking black pupils. Their eyes are nearly the same size as human eyes, but like all owls they cannot turn their eyes in the sockets. Instead, they rely on their ability to turn their heads 270 degrees in both directions. Under normal circumstances, owls use their eyesight for locating prey. All have a great night vision ability. The Snowy owl is no different; however, their eyes are designed more for long range precision rather than night viewing. Keep in mind, that while hunting in the snow covered arctic tundra, prey that function below the snow surface can be impossible to see. That’s when the Snowy owls exceptional hearing abilities come into play. These owls appear to have no ear tufts (which are not actually ears, but rather feathers that resemble ear feathers), but in fact they do have short tufts that can be raised when the situation calls for them to raise. We don’t necessarily know what that situation is, but it is mostly seen in female behavior while sitting on the nest. Besides Lemmings, the Snowy owl favors other small mammals like Arctic rabbits, waterbirds, fish and even carrion.

Snowy are the largest avian predators of the high arctic. Their total height is the same as the Great Horned and Great Grey owls, which is 27″, that’s equivalent to 3 soccer balls. Their wingspan has been recorded between 4′ 9″ and 6′ in length. Their wing feathers are comb-like with serrations that allow the owl silent flight. They are certainly capable of gliding; however, they rarely do and often don’t exceed 500′, even during migration. The Snowy is largely a migratory bird of prey, sometimes migrating south in large numbers. Many of the juveniles will travel even farther south than the adults so they don’t have to compete for food with the larger birds. That’s basically why they visit us here on the east end of Long Island during our fall and winter months. Our shoreline dunes resemble the low rise tundra landscape of the arctic, which are loaded with a variety of rodents and other small mammals, making hunting a breeze. Snowy owls also like to inhabit saltwater grass meadows and freshwater wet meadows, especially for hunting. Both of these meadow habitats are found from Amagansett’s Lazy Point area eastward to Montauk and are favored by the Snowy owls each year.

There have been 15 vocalizations documented of the Snowy owl, yet none of them were of the hooting nature. Hissing and screeching are included, but the more common sounds are more like a bark, or the deep alarm call of the Great Black Backed seagull. They also make the beak snapping sound when threatened. Incidentally, it’s now believed that this beak “clapping” sound is not actually the beak snapping together, but rather a sound made by clicking the tongue. Having been bit by owls on several occasions, and still having all my digits, I might have to agree with this new theory.

During the breeding period, the Snowy owls travel even farther north to the polar region. It’s during the arctic summer which is very short. The birds find a small rise on the tundra floor and scratch a small depression. In most cases, the Snowy owl will use the ground nest of another bird, rarely building their own. Early May to early June, the female will lay 5 to 11 glossy white eggs over a period of days, which results in staggered hatching. An average clutch is 7 to 9 eggs with up to 16 recorded in one case.

The eggs are laid every 2 to 5 days, depending on the weather. In other words, laying an average of 8 eggs could take up to 16 or more days to complete. Incubation however, begins once the first egg is laid, and is entirely the responsibility of the female. The males job is to consistently bring his mate food, while cacheing more food around the nesting area. Incubation lasts about 31 to 33 days, and the female will begin brooding her young while still incubating the unhatched eggs. Because there is an age and growth difference in chicks, sometimes an older chick will help the mom by brooding the younger siblings.

Unlike many other owls and bird species that experience staggering hatching, the Snowy owl is neither aggressive toward other Snowy owls, nor does the species engage in siblicide (older and stronger chicks killing the younger weaker chicks). It is believed this has much to do with the thermal benefits and energy conservancy of multiple owls huddled together. Both male and female Snowy owls are extremely protective of their young and their nesting area, and will defend them both to great measure. This can be displayed by dive bombing the threat to a full on approach and attack with both talons and beak. This defensive behavior has been documented toward a variety of predatory species from the Arctic fox to humans. There have been no human fatalities recorded, but there have been a few serious injuries.

Snowy owls will even attack larger mammals like Caribou and sheep, if their presence poses a trampling threat to a nesting area of unhatched eggs. In other instances, Snowy owls have been known to use the “broken wing act” to distract potential predatory threats away from nests and helpless young. This is the same trick used by the Piping Plover and Killdeer, with great success I might add.

After 3 weeks, the young may begin wandering away from the nest. They will fledge for the first time between 35 and 50 days, and by 50 to 60 days, the young Snowy owl will be able to fly quite well and begin hunting on its own. This total independence arrives around September/October, just in time for the start of their migrating season. Rather than compete with the larger adults for food, the juveniles often migrate farther south than the adults, to locations rich in prey availability. We hear in the Hamptons are among one of their favorite wintertime stays, with all the accommodations fit for an arctic visitor. Some of their favorite locations here on the east end are: Dune ridges between Two Mile Hollow beach in EH Village and Indian Wells beach in Amagansett. Another great spot, year after year is the dune ridge between Napeague beach (east Amagansett) to the western boundary of Hither Hills.

A few other consistent locations are Goff Point flats in Lazy Point, Amagansett, Eddie Ecker Park in Montauk, and my favorite Montauk County Park at the end of East lake Drive in Montauk. If a Snowy owl isn’t watching the boats enter the jetty behind Inlet Seafood, or sitting on the picnic table listening to the bell buoy sound in the chop, I can almost guarantee you’ll spot one along the low dune ridge of the shoreline that spans eastward toward Shagwong Point. Look carefully in the dunes, on the ridge or within the sparse beach grass while walking. Those who prefer long distant viewing with binoculars, the Snowy owl usually sticks out like a sore thumb, or more descriptive, like a large white object in a not so white surrounding. Snowy owls are often mistaken for paper or plastic trash, stranded in the flats or in the dunes.

Finally, the lifespan of the Snowy owl, in the wild is about 10 years. One rare specimen that was banded in the wild during its first year in Massachusetts, was later found deceased in Montana 23.5 years later. Captive, and / or rehabilitated species that could not be released back into the wild have been age recorded at both 25 and 30 year lifespans. The IUCN ( International Union for Conservation of Nature ) puts the Snowy owl at “least concern” on their Red List Status; however, they are still protected under the US Migratory Bird Act. In the tundra, starvation is the number one factor in a Snowy owls mortality, but when they migrate to more human populated areas, the dangers increase substantially.

Over one winter in the Northern Great Plains, 71 dead Snowy owls were documented. 86% of those dead owls died from assorted traumas that included collisions with planes, trains and automobiles, towers and other man-made objects, electrocution, entanglement in fishing lines and even gunshot wounds. The remaining 14% were due to “apparent” starvation. An “apparent” figure, as some of the birds were found dead with NO apparent reasoning, other than a decrease in the Lemming / rodent populations during the time the dead specimens were collected. Another sad example of how humans impact our most beautiful wildlife.

I hope everyone goes out and has the awesome opportunity to see one of these beautiful owls up close and in person. You’re bound to fall in love with their presence at first sight, and hopefully realize even more, why WILDLIFE MATTERS! Happy holidays everyone. Stay safe and be kind to each other, and to ALL living things. Peace!