Now here’s a critter that is sure to amaze almost everyone, simply because not many folks know they even exist here on the east end of Long Island. The fact that they are strictly a nocturnal species helps with keeping their identity a secret. I’m referring to the flying squirrel. There is both a northern and southern variety. The difference is often described as a slight pattern difference, or that the southern is a bit smaller, but the difference that I find most interesting is that the southern variety of flying squirrel is a bit more aggressive in its hunting and eating habits. Both northern and southern are omnivorous, and will dine on mostly nuts, fruits, fungi and even insects, while the southern will also eat birds, eggs and carrion. Kind of makes them a bit more carnivorous.

These are awesome little creatures that don’t actually fly at all, like their name implies. What they do instead is glide, sometimes up to 160′ from tree to tree. They have a parachute-like membrane called a patagium, actually several. Each side has a patagium that connects at the wrists and ankles. A smaller propatagium spans from shoulder to neck, and the uropatagium from ankle to tail. This allows the flying squirrel to steer with precision using both arms and legs. Their finely groomed, paddle shaped tail is used for stabilization while in flight. Meanwhile, their big black eyes absorb the faintest of all surrounding ambient light which gives them the super power of night vision. I told you these critters were awesome. Incidentally, the bat also has a patagium, propatagium and uropatagium, and bats ARE, the only flying mammals. 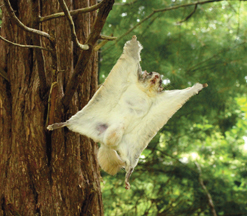 Flying squirrels normally nest in dead trees, snags, abandoned squirrel nests or owl cavities, even old forgotten bird houses. And just like everything else, when man’s progression ignores the impact it has on the wildlife, habitat loss pushes these critters into a nuisance wildlife status. It always surprises me when folks level a section of deciduous woodland, destroy the homes of hundreds of animals in one day with no warning, build a ridiculously large house, fence it in to keep all other living things out, then act dumbfounded when a squirrel chews an entrance through their gable vent to have babies in your attic.

Flying squirrels have been finding their way into homes here locally for a long time. Years ago, many people who thought they had mice in their attic, were actually contending with these cousins of the grey squirrel. No one could actually put their finger on it because “years ago” rodenticides were not required to be in safety boxes like they are today. Folks would just pour pellets or powder in open trays so everything could consume it. Dangerous right? Indeed, and that is why it is now required that 1oz. poison blocks be distributed in tamper-proof plastic boxes, that open with a special key and only certain sized animals could enter to consume the poison. These boxes (mouse size) no longer accommodated the entry for the flying squirrel, and the populations began to grow. 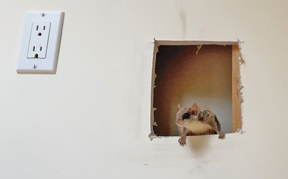 They are now considered a nuisance and are eradicated by pest control companies in a variety of lethal means, some of which jump the line of humane in my opinion. The incredibly deadly glue trap always kills more than the target critter, but let me tell you what it does to a flying squirrel. When the squirrel gets stuck to the glue, they generally will chew away at the body part that is stuck until they are released or stuck worse, at which point they will continue to chew their limbs off until their faces come in contact with the glue, or they free themselves and literally bleed to death. Another barbaric solution thought up by humans. The problem with trapping flyers is they are difficult to keep alive until retrieval. Once trapped, the squirrel often panics and rams back and forth into the cage walls until it either injures itself, knocks itself unconscious or literally beats itself to death. The other burden is that they almost always squat (house) in numbers, or as I like to refer it as, colonies. At one time I trapped 16 in one average sized attic over a period of 3 weeks. I made arraignments to use wifi cameras for around-the-clock monitoring and access for removal 24/7. When I trapped one, I was alerted and show it on camera, and I’d pick it up immediately before panic would set in. It was a lot of 1:00am retrievals. I only lost two, because two got trapped together and they beat each other to death running from side to side before I could get there. I corrected the issue by placing a facecloth inside the live trap cage. This encouraged the flyer to hide under it once trapped, and this seemed to keep them from panicking, even when two were trapped together. I no longer trap flying squirrels because of the risk of their death. If I can’t trap it alive to relocate, I leave it alone. It’s a great rule of thumb that works just fine for me.

So, here are a few tips to keep your home safe from flying squirrels. First, their target is your roof, and they get there from a tree taller than your house, and usually no farther than 150-160′ (commonly a 30′ jump). From there, they usually find a breech in either a soffit or gable vent, an opening in crown venting, a dormer soffit that doesn’t meet the roof snug, or simply a rot spot in an eve. If you can fit the tips of your thumb and pointer finger into the hole, it’ll accommodate a flyer. Holes can be repaired and vents can be reenforced with hardware cloth, but most crown venting is raised with a plastic filler that the flyer’s can chew through very easily. My advice is to eliminate the crown venting, OR before installing the crown shingles, secure hardware cloth over the breathable space first. This way, they can chew through the plastic vent material, but still not get into the attic. And why are we going through so much trouble to keep flyers out? Well, if you don’t know, then you’ve never had them, because they will party all night and you won’t get a wink of sleep. They make a lot of noise, and make a lot more poop. They will basically poop everywhere, but once they establish a particular location (like a heated recessed light housing) they will pile it up. I’ve seen piles of poop 4 inches high from these critters.
Northern flying squirrels mate once a year while the southern variety mates twice annually. Flying squirrels live about 4-6 years in the wild, yet can live up to 10 years in captivity. They are sometimes confused with a domesticated version called a Sugar Glider. Although they look strikingly similar in many ways, and even glide through the air exactly the same way as the flyer, the sugar glider is actually a non-native gliding possum belonging to the marsupial family. In other words, they have a marsupium (or pouch) that they raise their young in. Flying squirrels are from the order; Rodentia (rodents).

Sugar gliders have become a very popular exotic pet. Unfortunately, like most exotic animals that are bought for pets, they often get released into the unfamiliar wild once the owners move or get tired of caring for them. More classic human misbehavior aimed at our beautiful animals. Rather than become an invasive species, they simply die during severe cold weather in which their thermal regulating bodies are not designed for. Flying squirrels on the other hand, do very well in cold weather. They neither hibernate or go into a torpor state during the winter, but rather nest up together with 4 to 10 other individuals to maintain a comfortable body temperature and warmth within the nest.

For those still wondering, you’ll be surprised to know that the variety that we see most here on the east end is the Southern flying squirrel. Their ranges greatly overlap. The best news for those in Montauk, is that I know of no reported cases. I’ve trapped them in Beachampton (Napeague Stretch of East Amagansett) but no farther east. I checked with my colleague who concurs, but enjoy it while you can, because they are on their way. Happy FALL every one. My favorite time of year. Hope everyone is remaining healthy and safe.