Hi folks. I hope your making the best of this altered summer and staying healthy and safe while being careful, safe and respectful to others as well. Okay, maybe that last one was pushing it a bit. After all, isn’t that the biggest problem in today’s world, “a lack of respect for others”? It covers such a broad spectrum of problems.

Let’s face it, we’re a self-destructing species. Again I ask, how then can I expect folks to care about our wildlife, when we don’t care about each other? That’s an easier question to answer than you might expect. It’s easier to care for something that has no intention of hurting you or impacting your life. It’s easier to care for a living creature whose full intentions are to share the planet with all other living species. It’s easier to learn and understand how to live and get along with each other, then it is to not. It gives us more positivity in our lives, and allows us to enjoy the time we have here. I’ve always been a follower of the saying, “always leave a place looking better, then when you arrived”. It’s simple respect, and my duty to the planet and the environment that I’m a GUEST OF,… just like YOU!

So, with that rant behind me I’d like to tell you a little story of something special that recently happened. No, I’m not talking about my recent amazing discovery after taken the Ancestry DNA test, as nothing could possibly top that (I found that I had a son I didn’t know I had). The special item is wildlife related and that is why I wanted to talk about it this month, and why I started the column shouting from my worn-out soap box. Let me rewind just a bit.

Many months ago, I caught wind of a music project being put together by a mutual wildlife-loving friend, who I remembered years ago mentioned that she enjoyed playing the bass guitar. She, and other friends of hers who shared the same animal friendly attitude, had gotten together and learned a particular song. With financial help and support from the East Hampton Group for Wildlife, they raised enough money to hire Grammy Award winner Cynthia Daniels of MonkStudios in East Hampton to record and mix what resulted in an amazing piece.

The song was a cover of the Paul McCartney song “WILD LIFE” from 1971’s “Wings” first album of the same title with Paul McCartney. The song then, as it remains, is a message to the world about our impact on the other beautiful living creatures we share this planet with. The exception is, that today the line “animals in the zoo” is even more relevant as we continue to fence ourselves in, which in reality creates a cage effect to the wildlife TRAPPED on the little sliver of space we leave for them on the outside,… and we still want more.

When I heard the song, I was simply amazed how these folks who called themselves the “LightWorkers” could create such an awesome cover. With an ever over-flowing plate of projects and plans, I couldn’t help but offer the group my help in creating a visual “music video” to go along with their recording. I didn’t want money for the work, just an opportunity to use the piece to promote my nonprofit wildlife rescue organization (WROEH.org). With a simple agreement, I got right to work. After a few days of no solid starting point, I realized this wasn’t going to be as easy as I thought. This recording was flawless and powerful and the video had to compliment that. Not an easy task.

Days turned into weeks and then months. Then, BAM,…covid-19 puts an even more uncertain delay on the project. My mom is 92 and in a wonderful care facility. Unfortunately, the virus found her there. She was quarantined in the facility and surrounded by folks in HASMAT suits and masks. She showed no symptoms, but the protocol was the same as if she did. This scared the hell out of her. My wife Dee and I felt so badly, we decided to program an iPad so that she could ‘FaceTime’ me and my sisters whenever she wanted to. This helped her and it helped us. We got to look into her eyes and that’s when we knew she was okay. Just looking in her eyes meant the world. It gave us silent information that cannot be expressed in words. That’s when it I got the idea for the music video. If we humans could just look into the eyes of our wildlife, and understand their plight to survive in a world where MANY consider them an expendable nuisance, maybe it would reach more folks, so that’s the direction I went. I began writing the script/storyboards and it just flowed, meanwhile mom beat the virus and is doing just fine.

After a film session with the band at a local nature trail, I puzzled together a mix of new and close up wildlife footage, some disturbing statistics, localized issues and visuals of deer in distressed due to human impact, (ALL OF WHICH WERE RESCUED BY ME PERSONALLY, some with the help of volunteers from Wildlife Rescue of East Hampton, 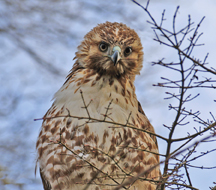 with the exception of two photos of deer that were struck and killed by speeding vehicles). I went through four drafts before the entire band and sound producer agreed I had expressed the message of the song properly for everyone to understand, and most of all share. SO, with the audio mix and the film completed and married, we had just one more hurdle to clear; permission to use. 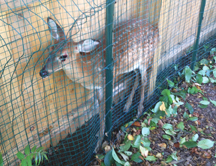 Anticipating this to be the most difficult leg of the journey, I relaxed and embraced patience. I’m fortunate to know another great animal advocate, Mr. Ron Delsener who offered to make the connection through Mr. McCartney’s attorney, whom he knew. This was a generous offer and one that made the waiting even easier. Then something amazing happened. 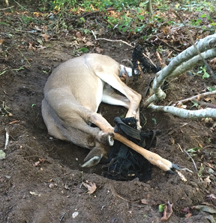 Not even a week had gone by and I was contacted by the McCartneys in regards to wildlife advice/information. This turned into actually meeting with both Sir Paul and wife Nancy and again, discussing wildlife. I even introduced them to Athena (my screech owl), a baby opossum, and then shared my Nature Trail and Scurry the Squirrel books with them. They were incredibly awesome folks, and for that reason I did something I’ve never done before. Explaining profusely that my intentions were NOT to gain permission and that we were all quite proud of being patient in the normal process of gaining the proper permission of use, and that my intention was strictly to end our week of wonderful wildlife chats with a special LOOK at our finished video HONORING his heartfelt song and the message that is still and even more important today.

Long story short, hours later I received an email giving me (and the band) full permission to use the song in any way we saw fit, which would benefit and/or promote the nonprofits East Hampton Group for Wildlife and my 501c3 Wildlife Rescue of East Hampton, Inc. and of course benefit, protect and help our wildlife. An amazing act of kindness by the McCartneys that will help spread the message of hope for our wildlife, throughout our community and maybe even around the world. I, we are extremely grateful for their generous gift. Now we must spread the word, spread the message. I’m hoping you will help, because Wildlife Matters. Thank you.

“When I look into the eyes of an animal, I do not see an animal. I see a living being. I see a friend. I feel a soul.” ~ Anthony Douglas Williams.

You can view the music video “Wild Life” by the LightWorkers, MonkStudio’s Cynthia Daniels and Imagination Nature’s Dell Cullum at the following locations: