It’s no secret East Hampton Town has issues with trash and litter. Whether it’s a visual burden along our many roadsides, spread across our beaches and bays, or simply overflowing from one of hundreds of trash cans from Montauk to Wainscott. Our beaches already are scarred daily by the perpetual filth that our oceans cough onto our shorelines every high tide but, add to that the trash that gets pulled from overfilled trash receptacles and bags that are simply left on the ground next to these dumping stations. East Hampton Village goes a step further each summer and actually places the trash receptacles ON four of the public beaches, owned by the East Hampton Town Trustees. That’s right, you didn’t hear wrong. They literally moved the cans closer to the water, creating yet another source of trash and filth to our already vulnerable beaches and ocean. 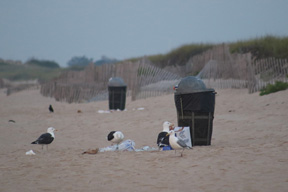 During the daytime hours, the Village crews keep them well maintained but, after the last dumping until the following day, they are neither emptied or supervised, making them beacons of abuse, illegal dumping stations and the complete opposite of everything common sense makes obvious in regards to safeguarding our environment, particularly our beaches and ocean. Not only does the shoreline winds spread the trash in all directions but, wildlife as well cannot resist the filth as an alternative, yet low nutritional food source. These animals pull debris from the overfilled receptacles and rip into the bags placed on the ground around the cans. Seagulls and raccoons are the leading critters that enjoy spreading out and eating the trash they can get to, and although they may look like they enjoy the filth, it’s actually very bad for them, and in some cases can be lethal.

We all know what happens to our amazing marine mammals when confronted by the results of our carelessness. Over a million seabirds and 100,000 marine mammals die annually from either ingestion of or entanglement in plastics alone. It’s a staggering reality but, one that we can’t ignore or support by placing trash dumping stations ON the beaches.

Our population on the East End has grown like a “mile-a-minute” vine and shows no signs of slowing down. Each day more and more of our wildlifes habitat is replaced with homes, businesses and parking lots. Wildlife removal businesses are a dime a dozen, and many destroy the animals they trap. For quite some time, NYS DEC required all licensed nuisance wildlife trappers to euthanize ALL trapped raccoons, including their young, before they leave their customers property. I never followed that “law” because the state of New York, not to mention the DEC, doesn’t have the moral right to tell me or anyone else that I must take the life of another living thing. That’s just ridiculous. Particularly from a department that suggests drowning as a humane method of euthanasia. This has led me to be very successful as one who SAVES animals.

Meanwhile, our beautiful deer population has been constrained and blamed for just about everything bad in our natural world. As if there were an invisible fence around the Village of East Hampton, their mayor and board of trustees attempted to control Nature a few years back, by hiring a group of wildlife barbarians to perform some low quality Frankenstein birth control field surgery, which was not only a complete failure, but it caused suffering and death in many deer and divided the community deeply. When I see a deer crossing sign reminding me of how many vehicle / deer collisions in the past year, I don’t think as the deer being the problem. I clearly see a problem with irresponsible driving and speeding. Remember, the driver has full control of the vehicle, not the deer.

I also saw a lot dead turtles on the road this summer. More innocent victims of vehicular negligence. The mute swan is another target of New York State who were recently looking to extirpate the species because they weren’t native to America,… “they don’t belong because they don’t come from here”. Sound familiar? Animals are much easier to bully because they can’t defend themselves. This abuse carries right into the lives of domestic animals as well. Sadly we see this all to often. It also carries over to how we treat each other, which we sadly see even more often. Fortunately there is a growing number of animal caring folks (aka angels) who have become the VOICE for these animals in need, while more and more wildlife rescue responders are coming together to help our wildlife in distress.

Farm raised King Pigeons and White Doves are released into the wild at weddings, funerals and special events, like balloons. Rarely do these birds survive the night, as they become a meal to seagulls, hawks and other predators they don’t know about and have never even seen. The ones that survive predation often get run over or fly into vehicles. Others simply starve and die a slow painful death. Homing Pigeons were originally used for releasing at weddings, and although they were bred to return home (sometimes up to 600 miles away) they have become very expensive. This is why store bought birds, like the King Pigeon and White Dove are substituted however, it is illegal to release store bought birds into the wild. They are domestic animals lacking the knowledge and skills to survive in the wild. Please folks, no more releasing doves. Certainly this brings no joy nor honor to any occasion, in fact releasing a dove into the air after having been kept confined for its entire life, is comparable to abandoning your pet in the woods 20 miles from home.

Folks, I suggest we take a step back and a slow deep breath, and look around. Remember that we are sharing this planet with other living species and we MUST recognize them, rather than find ways of eliminating them. We must learn to live together but first, we must learn to respect each other and not take for granted all the natural beauty that surrounds us. It IS a gift, and we must accept it as such. Our wildlife needs our help now more than ever before. Compassion and understanding is a perfect beginning to make that connection.

If you think we could do without the trash cans on the beaches in the Village, perhaps you can email the EH Town Trustees at info@trustees.easthamptonny.gov and also sign my petition at www.change.org (search) “Keep Our Beaches Clean and Free of Trash Cans” Thanks everybody. Enjoy the rest of the summer and remember, WILDLIFE MATTERS.