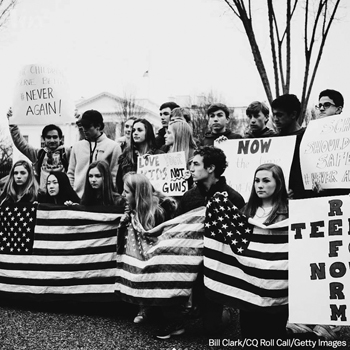 One of the 17 victims and hero of the Florida Marjory Stoneman Douglas High School shooting, was Scott Beigel, 35 and originally from Dix Hills. Beigel was a teacher and cross-country coach at the school. According to reports, he was shot as he tried to lock a classroom door to shield students hiding inside. He’s one of the numerous victims of such crimes our country has been dealing with for way too long.

What’s happening to our youth? Why do so many gun incidents occur at our schools – and some even by our youth? Does it seem things are breaking down, pressure is mounting, coping skills are missing, desensitization to violence happening? Maybe a combination? Or are guns too readily available in our country?

The advocacy group Everytown that supports stricter gun laws has reported that there have been 17 gun incidents since January 2018. According to Snopes.com, only 7 of them are classified as ‘school shootings’, the others include accidental, suicide attempts, or on the grounds. Everytown’s definition states “any time a firearm discharges a live round inside a school building or on a school campus or grounds,” it counts as a school shooting, regardless of whether or not the shooting results in injury or death. I’m not sure it’s really worth the debate. Isn’t 7 bad enough?

The latest incident in Florida has once again stirred conversations, emotions, debates and call for action. But, trying not to be too cynical, isn’t this what we saw after Newtown in 2012? I feel like although there were many other school shooting in between these two, the uproar only happens when there are many casualties. I think every life matters. There have been 400 people shot in over 200 shooting since Sandy Hook, as reported In the New York Times by JUGAL K. PATEL on FEB. 15, 2018. This data is from a nonprofit group, the Gun Violence Archive, which started keeping track of school shootings in 2014.

Why is that? Are we as adults, politicians, parents also getting desensitized- or has it already happened? Is this our new norm that we have to get used to? I know as an educator in a classroom with 23 young children every day- not a day goes by that I don’t think about whether or not this will be the day it happens to us. We can’t and don’t dwell on it- or we wouldn’t be able to go in and do our jobs each day. But it’s in the back of every educators mind at one time or another. Imagine how the children feel. Do they wonder as well? I’d like to believe that as the hype of each incident lessons, they once again feel safe. But who knows?

Yes there are groups out there who continue to push and fight for change, but it’s obviously not enough. There are so many unanswered questions. How did we get here? Why? How do we make change? Like many other major issue in our country, we drag our feet, debate, and blame. Change, if it happens, is slow. But sometimes it does happen and can in this case too. School shootings are just a part of the larger gun violence problem in our country. As we know, mass shootings happen in all different public venues. But taking care of our children, keeping them safe and feeling safe needs to be a priority.

Talking is good, needed even, but action must happen. No more putting this issue on the back burner. Our country outranks the world in school violence according to a commentary in the Chicago Tribune on February 15, 2018 which cited data from the Academy for Critical Incident Analysis. They collected data on school violence around the world which took a broad look at incidents where someone was killed, or a murder was attempted, and charted every one that had two or more victims. Their findings noted that between 2000 and 2010, there were 57 incidents in 36 countries. Now here’s the hard truth, half of those incidents -28 -occurred in the United States. That’s before Newtown, Connecticut in 2012; makes you think. No?

In the wake of the Florida school shooting dialogue has already begun. The young adults from Marjory Stoneman Douglas High School are devoted to challenging State and Federal Law Makers for stricter gun control- and they are impressive in their conviction. In addition on February 14th, the March for our Lives Movement is organizing a march on Washington for March 24 – calling it MARCH FOR OUR LIVES! Stand With Us – Refuse to allow one more needless death. To be a part of it go to https://www.marchforourlives.com/march

“Every kid in this country now goes to school wondering if this day might be their last. We live in fear. It doesn’t have to be this way. Change is coming. And it starts now, inspired by and led by the kids who are our hope for the future. Their young voices will be heard.”