Beyond evolving into amateur meteorologists, surfers also become hyper aware of their beach and ocean environment. Plastics in the water, trash on the beach, chemical run-off and a heightened level of pollution in the sea after a rain storm certainly gets our attention. Another condition to be cognizant of is climate change. Regardless of your stance on the catalyst, the impact of climate change presents a parade of sobering statistics. Coast lines around the world will be reshaped or disappear all together 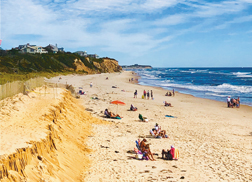 because of rising sea levels. Countries like the Maldives are in danger of sinking all together; it should be noted that it’s capital Male, is at the same sea level as Manhattan.

We can look at Hurricane Sandy for recent, stark evidence of a storm reshaping the coastlines of New York and New Jersey, with more storms and land changes to come in the future. In addition to our planet changing, surf spots will feel the effects all over the world. Some may completely disappear, and rising water could run into sea walls, street ends and houses, eliminating surfable breaks all together.

While we follow the group and surf in packs, this means that surfable spots will be more crowded than ever (already a prickly issue). Secret spots may be wiped out, and preserving homes, the precious coastline and real estate will take precedence over preserving the waves. Think of spots that are fantastic at low tide. If those run into bluffs and perpetuate erosion, homeowners will do what they can to preserve their houses, allowing some beaches to vanish.

Some research shows climate change has the power to alter the caliber of waves, producing larger waves in the South Pacific and smaller waves in the Northern Hemisphere. The larger waves however are breaking over coral reefs, which are also in danger of extinction.

If this information is enough of a buzz kill for you, let’s figure out how to solve for climate change rather than debate about the root cause. Caring about our environment is not just for surfers, heightening our awareness is a beneficial step for all of us to preserve our planet.