If you are a regular reader of this paper, you know that at the end of each month the Senior Nutrition Center honors the young at heart with a birthday cake and get their picture taken by this reporter to remember the special occasion. For the first time, this past October, there were no celebrants present and therefore no cake to speak of.

It was just a year ago, last December, (see Winter 2018 issue) that former Executive Director and Co-Founder of the Montauk Senior Nutrition Center, Eileen T. Bock was awarded with two plaques of appreciation for her twenty five years of service. One, from the Town of East Hampton presented to her by E. H. Supervisor Peter Van Scoyok, the second accompanied with a dozen red roses presented to her by the center’s Board of Directors and friends. The latter plaque currently hangs on the wall in front of the center’s entrance for all to see.

Eileen with co-founder the late Dorothy Lamay, opened the Senior Nutrition Center originally at the Montauk Community Church in 1992 until the Montauk Playhouse opened in 2005. She was responsible for recruiting the staff and volunteers to serve lunch from Monday to Friday and to help in its daily activities such as playing bingo, cards, dominoes, mahjong and made sure that yoga exercises were provided including monthly visits from a registered nurse for blood pressure screenings.

I remember Eileen as a no nonsense lady who took her job seriously making sure everything went smoothly. Most of the times, when she was not in the kitchen helping her nephew and chef, Eric Salvadori, I saw her at her desk doing paperwork for the weekly menu or planning the yearly Over 90’s party and special holiday luncheons. At the end of each month, Eileen graciously provided me with the names of the birthday celebrants and proudly brought out their celebratory cake after a scrumptious and well balanced meal. Eileen made a point in making the honorees feel special by congratulating them and singing Happy Birthday with their peers.

There were times when the seniors thought that the center would close due to few seniors attending but because of Eileen’s hard work in obtaining generous grants from the town of East Hampton, discounts from local vendors and private donations such as fresh salmon from local fishermen or ice cream from the local parlor, the center was able to thrive successfully. Eileen loved her seniors as much as her job.
Born in Jamaica, Queens, N. Y. on October 8, 1936, from parents John and Adele Tschantre, Eileen grew up in Whitestone, Queens, N.Y., and graduated from the School of Industrial Arts in New York City in 1954. She married the late Alexander Bock in 1967 and retired in Montauk in with her husband at their house on Fleming Road in the 70’s. Eileen loved dogs and often shared with me the picture on her desk of her rescue dog Dali from the ARF Animal Shelter.

Eileen was a very private person who never bragged about her past accomplishments. Few know that she was a photo journalist for United Press International or a reporter for the East Hampton Star. She was also president of the Friends of Montauk Library and served on the Montauk school board.

Although Eileen had health issues for the past couple of years, she rarely talked about her illness and tried her best to work until she could no longer. She retired quietly this past June (see August issue) without much attention. Eileen died on her 82nd birthday, on October 8 at the Peconic Bay Medical Center in Riverhead and was cremated. She will be laid to rest at the Fort Hill Cemetery next to her husband Al at a later date. She is survived by her sister Adele Scott of Marshall, Missouri. Although Eileen disliked having her picture taken, this reporter is glad to have taken one of her rare smiling picture taken a year ago last October at the insistence of her fellow celebrant and volunteer, Ann Peterson who convinced Eileen to pose with her. Little did we know it would be her last birthday picture.
Montauk will miss you Eileen. Thank you for having the foresight of providing a nutrition center for the Montauk seniors to enjoy during their autumn years. You will always be remembered, especially on your birthday. 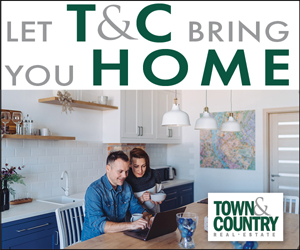