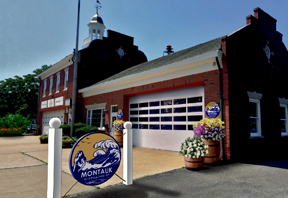 Sharing the space with their neighbors, the North Fork Brewery, in the old firehouse thus turning the entire building into a place to join with friends and family, enjoy some locally made spirits, and meet new friends. The building is listed on the town’s registry of local landmarks. Although Riverhead first organized a fire company in 1836, the structure was built in 1931 on Second Street and the Riverhead Fire Department occupied the building until 2008.

Although they won’t be opening until August 1st, due to the delays with coronavirus restrictions, we were able to tour the space and get the inside scoop from the owner and distiller.  Owner and operator Leucio Iacobelli has transformed his Hampton Rum Co., based in Westfield, NY into Montauk Distilling Co. and making Riverhead their home base. Although he now lives in Westhampton, he was inspired to name his company Montauk Distilling because he and his family have spent their summers in Montauk, appreciating and enjoying all the beauty Montauk has to offer.  Leucio is quite enthusiastic about this new direction. In addition to the three rums and a gin they already produce, they will be adding vodka, whiskey bourbon and a hard seltzer to the mix.

As you enter the large garage door of the firehouse into the bar/tasting area, you immediately take in the high ceiling and sleek décor. Although it doesn’t look like the ‘old firehouse’ on the inside, they are proud to be giving back to the community by using the building – they even found an old board with the names of the fireman who worked there, and hung it on the wall. 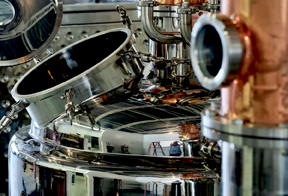 Consultant Tom Anderson of St. Louis is there to help make the new distilling process. The distillery will operate in the back room-“It’s a grain to glass operation.” Explained Tom. The grain will come from local NY farms and will be ground in the on-site mill. From there it moves to the mash tank for heating –then to two steel tanks where they add the yeast to ferment the solution. Finally it’s pumped into the still to boil at just the right temperature for the ‘magic’ to happen. Eventually it gets bottled, labeled, and ready for distribution.  I made it sound simple, but it’s much more detailed and that’s why the Head Distiller is so important to the operation.

North Fork native Matt Ellis, has joined the MDCO family as the new Head Distiller, and he’s up for the job.   Matt learned the trade as an apprentice under esteemed Master Distiller Brandon Collins, before branching out on his own and joining MDCO.  He will be playing an integral role in bringing the vision for “MDCO at the Firehouse”, their new distillery & tasting room in Riverhead, NY, to life.

Matt plans on showcasing locally grown grains and other products and building a brand that represents the community that he grew up in as a whole. The team is keeping everything as ‘Green’ as possible Matt told us.   Including re-using some of the water back into the cycle, and returning some of the byproduct back to the farmers for feed.

As they plan for opening, details are being worked out for tours, bar service offering local wine, cider, and beer on tap, as well as locally prepared snacks and possibly a food truck.  They are working hard to make it ‘right’- the space, the product, and the vibe.

We are looking forward to the new spirits, but for now they have a nice selection: Black Sail Rum a full bodied aged rum with a first-class flavor profile, 71st Regiment Gin an exceptionally crafted gin with a full array of botanical notes, Sunburn Rum infused with the wonderfully smooth, bold flavor of cinnamon and Bellamy Spiced rum that is full of big flavors. We had a chance to sample the Gin with classical juniper notes as well as softer, more subtle notes such as honey suckle and rose petal, lavender and peppercorn. In addition, we tasted the Spiced Rum enjoying the blend of vanilla bean, allspice, citrus and other natural ingredients which create a smooth, mellow first sip, followed closely by a spiced and citrusy finish. Both spirits we were smooth and quite tasty.

We wish Montauk Distilling Co all the best, and good luck in their new home. Be sure to visit their website for updates – https://montaukdistillingco.com/