We just celebrated our 20th season for The Montauk Sun. During that time we’ve covered some really exciting and fun events, and once in a while some events that weren’t fun but critical to the times we lived in. Near the end of our second season September 11, 2001, the news flash was that a plane had hit one of the twin towers. As the morning unfolded we all realized this was an attack on our country. As the news broadcaster announced, one commercial jet after another crashing in different parts of the country- being used as guided missiles, my heart dropped down to my stomach. My fear was this could go on all day and take so many American lives. Our government reacted quickly and grounded all planes in our air space which I’m sure avoided further acts of terrorism.

When flight 93 went down I knew we were starting to fight back. I later learned that Tom Burnett with Mark Bigem and other passengers tried to take the plane back from the hijackers. They gave their lives so other Americans could live. Our country came together and honored all of the heroes that stepped up without concerns of their own well-being to help protect their fellow Americans. 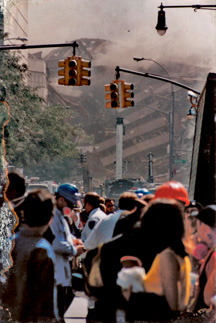 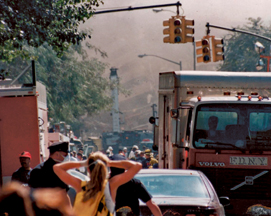 The next day I left my office in Westchester to go to ground zero. When I reached the West Side Dr. the road was blocked off and only first responders we’re allowed to travel south to the city. I was allowed, as a reporter, to continue and as I proceeded south I was the only car on the parkway and the toll was up so I passed straight through. Feeling as if I were truly was entering a war zone, I drove as far as Bleecker St. where all roads going south were blocked off with armed guards. Again I was allowed to continue. Two blocks in towards ground zero I was covered with gray soot so I put on my mask and goggles. Four blocks in parked along the road, towed away from ground zero, there were crushed police cars, ambulances & firetrucks that the second tower had fallen on. Flowers were placed on the vehicles that told me more of our first responders had perished the day before. I noticed the impressions of my feet getting deeper in the soot as I continued. There weren’t any people on the street at this point and not much noise, only some sirens in the distance. An older women was just standing on the corner and it looked like she was in shock, I asked her if I could help her and she just said “God bless you and move on.”

This is taken from my article in the 2001 October issue of the Montauk Sun: 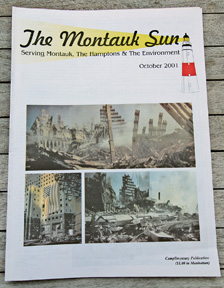 There was a deep feeling of loss and disappointment in the air, but still, at the same time, each person was reaching deep into their souls for the strength necessary to come to the aid of our neighbors. The faces of some of the firefighters coming off the pile of debris told me Ground Zero could make a strong man cry or a peaceful man hate. One firefighter walked past me covered with dust from the pile. He stood about 6 foot three and the expression on his face told me he had just visited hell, and if he had the chance he could crush those responsible with his bare hands.

I spoke to Charles Mancuso an ironworker who had watched the news Tuesday night from his Yonkers New York home. He went to Ground Zero Wednesday morning. He said the debris extended almost 2 blocks from where the towers stood, and it was like a battle zone. He was working in the area near the pedestrian crossing. Charles did assist in the rescue of two firefighters who were trapped in one of the pockets while they themselves were searching for victims. The cheers of the rescuers which arose as the two firefighters were liberated from the rubble was just too great for Charles to put into words. There were also retired iron workers there helping who had worked on the construction of the towers 30 years earlier. 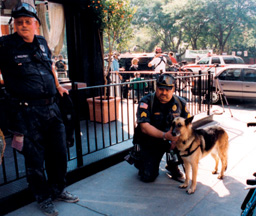 I also had a chance to speak to Dale, a police officer from Illinois. His partners were Joe Palfrey and Miranda, an 11 1/2-year-old canine search dog. They had driven straight through the night and went to work immediately, they looked like they had been to war. The only thing Dale had to say was, “We should find out who did it and pay them back.” Then he sat down on the sidewalk next to the building behind the fence [in the photo] and said, “We’re going to take a little rest.” I thank him for coming to New York to help.

As I walked back to my car through the barren streets north of Ground Zero, I felt great sorrow for the victims and the rescuers. This was truly an evil act. There could be no justification for this crime. I can only hope the people involved in this attack would be brought to justice swiftly. There is no turning back. They’ve changed the world forever.
When I returned home I turned on the news. The camera panned past Miranda, Dale, and Joe sleeping on the sidewalk where I left them some two hours before. They were getting there a little rest, less than 1000 feet from where they would be returning to their search. I can only respect and honor all these volunteers who gave of themselves. They are truly heroes.