It’s inevitable that when families get together and are mixed age groups, the talk most likely turns to comparisons of today’s culture and lifestyles and how different things are now. During our holiday gatherings with friends and family a bit of nostalgia seemed to creep into the conversations on “how it used to be in our day”.  Of course this is the same line that our parents and grandparents used to say and it might have produced a few yawns from the younger generation, but now we are repeating the phrase.

Entertainment: We didn’t sit around in the house watching movies on a DVD or playing a video or computer game, we went outside to play. Most of the time we’d go bike riding, roller skating or jumping rope with our friends. For something really special, our mother would take us to an indoor roller rink that had music playing as we went around the huge oval shaped rink. Skaters could either rent skates for the session, or come with their own. 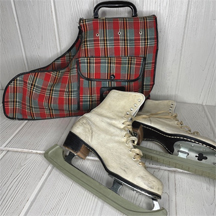 One of my favorite Christmas gifts was a pair of white leather skates, complete with a plaid metal carrying case. To complete the ensemble some girls added fluffy pompoms to their skates and dressed in a short skater’s outfit. If we couldn’t play outside because of rain, we’d invite a friend over to play board games like Candyland, Chutes and Ladders or Monopoly. Later as teens our entertainment would be to go to the local ice cream parlor where friends met afterschool. Our neighborhood favorite was absolutely right out of the Happy Days TV set where friends met, gossiped and the juke box was always going, playing the latest hits. We could sit there for hours and only ordering a coke, fries and maybe now and then a burger. If we had a friend with a car, a drive in movie might be on the agenda for the weekend, if a movie choice could be agreed upon amongst five girls.

The Neighborhood: We grew up in the Bronx and in those days it felt like a small town community. Everybody knew each other in the neighborhood and the shopkeepers knew our parents and us by name. My parents shopped at the local butcher, with its saw dust on the floor and the butcher wearing his white apron and a pencil behind his ear. The order was added up on the butcher paper right before sealing the meat wrapper. No calculator was needed. As a little child I looked forward to the butcher asking my dad, “Is it ok if I give her a piece of bologna?” which of course it was.  On Sundays we went to the bakery after church to buy jelly donuts and rolls for a late breakfast. A special treat was a large black and white cookie, which is a soft cookie iced in half chocolate, half vanilla icing and was delicious! On special occasions, when company was coming, my mother would buy a layer cake or pastries for dessert after dinner. A packaged cake from the supermarket was never a thought for guests. Yes, they were the “good old days” and talking about them when the family is gathering around is fun for the older members to enjoy the memories and the younger ones to hear about how it used to be.