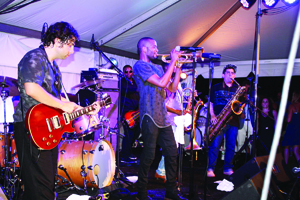 Promising to be a hot, swinging evening (and the weather also added to that feeling), the Diamond in the Rough Benefit Gala at the Montauk Playhouse lived up to its hype.  This year’s honorees were George F. Biondo and Perry B. Duryea III both long time Montauk residents, with Mr. Duryea being born here.  Each year the Playhouse picks honorees to recognize them for their commitment to the Montauk community and their ongoing service to help others. The money raised at this event, through ticket sales and auction items, is used toward completing the unfinished portion of this magnificent Playhouse building, which will include an aquatic center and theatre. Some of the fantastic live auction items included a signed NY Ranger hockey stick and a pair of regular season tickets, Drum Set autographed by Chad Smith of the Red Hot Chili Peppers, Weekend Away in Carl Fisher’s Montauk, Tampa Bay Buccaneers VIP Package and a visit to the set of The Affair (ShowTime’s highly rated series filmed in Montauk) and lunch with its star Dominic West, Montauk Lake Club 2017 membership and a host of other fantastic items. Multiple tables were also lined up that included silent auction items that featured art work, fitness or wellness packages, dining and travel experiences and novelty home décor items to name a few of the scores of selections. 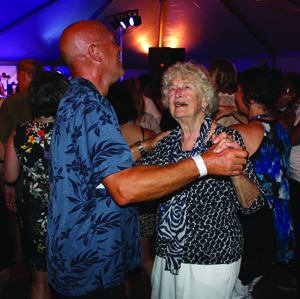 This year the music of Trombone Shorty and Orleans Avenue band was certainly a unique addition to this fundraising gala. The Playhouse Gala is one of Montauk’s premier summer events and tickets were sold out. It was more casual than in previous years. Gone was the formal sit down dinner and in came tables of appetizers, passed hors d’oeuvres and a buffet dinner and liquid refreshments of all kinds.  Most of the food had a New Orleans, southern style flavor, including barbeque brisket, Creole Seafood and vegetarian jambalaya, Fried Oyster Po’Boys, jalapeno cheddar biscuits, pecan pie, Bourbon bread pudding and a host of other selections for the evening’s offerings.  Successful events like this one hosted by the Playhouse Committee moves the needle on the fundraiser goals even that much faster! To send a donation to the Playhouse to help with their goals or to see their upcoming events for the rest of the year, visit montaukplayhouse.org or call 631.668.1124.