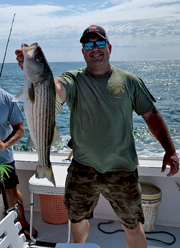 It was Monday September 13th, Captain Dan and I had Brendan, Keith, Ryan & Willy from FDNY Squad 252 of Bushwick Brooklyn aboard. I always look forward to the annual Monday FDNY fishing outing in September. This year the Fight for Firefighters Foundation had taken over the long running tournament. https://www.fightforfirefightersfoundation.com/about-us

We started the trip looking for scup on the north side to use for live bait. We ended up with keeper Black Sea Bass. We turned the corner at the lighthouse and moved down the south side beaches to an area we caught lots of scup two days earlier. They were still there and we caught enough to try some drifts.

We went to an area we had nice slot size Striped Bass three days earlier on live eels. Since we had live scup this time, I put two out with one live eel on the first drift. After no bites, I switched to two eels and one scup. It helped when the port side eel rod bent over. The fish came in easier than expected. Expecting to see a small striper on it, I was pleasantly surprised to see another very nice sized Black Sea Bass on the circle hooked live eel.

It became evident that live bait fishing wasn’t going to get it done so we switched over to trolling. We tried umbrella rigs which worked well three days earlier. The fish weren’t cooperating so it was time to change tactics for a third time.

When I put the green “parachute”jigs and red pork rind out on the jigging rods Ryan said, “there’s no way that’s going to work.” Within minutes each one of the four firefighters were reeling in striped bass after striped bass. It was a fantastic ending to a great day.

Captain Dan and I were in sync. He’d turn the boat around after each fish. With a glance and a nod the wire line went back in the water. When I let it out to the hit zone, I’d hand the rod to one of the four anglers. After a minute or two of jigging it was fish on. On the way in, Ryan was still saying, “there was no way I thought those ‘chutes’ would work.”