The Montauk Observatory (MO), with co-sponsors Guild Hall and Northern Trust hosted two lectures: “Space Exploration” and “My Life As An Astronaut” that was held at the John Drew Theater Guild Hall in East Hampton, on June 27 at 7:00pm and June 29 at 2pm. A cocktail reception to meet the VIP’s, sponsors and MO friends took place prior to the talk.

The unique couple gave an awe inspiring presentation with out-of-this-world, pictures and videos taken by the ISS crew showing what Earth looked like 250 statute miles away, traveling at 17,500 mph in 139 days from July 28, 2017, to December 14, 2017, completing 2,224 orbits of the earth, totaling 58,835,163 miles (108,962,720 km). Watching our own planet’s hurricane Irma and Jose, coastlines of different countries, colorful aurora borealis, what Long Island looks like at night, sunsets and sunrises, was mind boggling. You could hear the ooohs and aaahs of the wannabe astronomers when Commander Bresnik took his spacewalk from the station to replace one of the two Latching End Effectors (LEE) on the station’s robotic arm, Canadarm2 with US Flight Engineer Mark Van Rei.

Komrade Bresnik, who is still on active duty with NASA since 2004, a distinguished and highly decorated US marine and F/A -18 test pilot, discussed the vigorous training he went through in becoming an astronaut. Pictures of him as a Cave-a-naut with the European Space Agency to test living deep beneath the Earth’s surface and as an Aquanaut for NASA’s Extreme Environment Mission Operation (NEEMO)19 were shown. He discussed what it was like living in space, the tight quarters he slept in, the food he ate and the experiments each astronaut performed such as finding cure for cancer and arthritis.

Co-presentor, Mrs. Bresnik explained her role as the lawyer for NASA and ISS. She provided the lists of Origins of Space Law, Outer Space Treaty of 1967 and ISS Crew Code of Conduct. Pictures of the family’s travels around the world, meeting Russian cosmonauts and their families were also shown. She added some humor with her playful, and good natured way by sharing her family’s experiences on earth, such as how the news of their daughter, Abigail’s birth was communicated to the commander while away “playing in space”. Fortunately, with today’s advanced technology, he was able to meet his daughter through video the following day while handing out candy cigars to the ISS, 6 man crew. 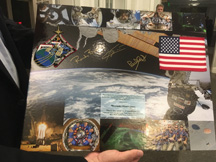 In the second talk, son Wyatt and daughter Abigail joined their parents with an encore presentation. This time, the talk was geared toward a much younger audience who lined up to ask the foursome many interesting questions such as:

“How heavy is the space suit?” Answer. “40 lbs and 300lbs fully equipped, but remember, in space there is no gravity.”
“What’s the hardest for you while in space?” Ans. “ Everything floats, so you have to learn how to eat, drink and move differently.”
“What happens when you get air sick?” Ans.” A special container bag is provided including a cloth attached to wipe your mouth with and to guide the liquid inside.”
“What language do you speak in space?” Ans. “ When I flew with the Russian cosmonauts, “Russian” but “English” is the spoken International language in space. ”
“Who inspired you?” Ans. “John Glenn, the first astronaut to orbit the earth and other astronauts before me. “
“How many stars did you see?” Ans. “Billions”
“Did you see any aliens? Ans. “No, but with all the planets that exists, maybe there are. Methane that supports life was found in Mars”

When Wyatt and Abigail were asked what their thoughts were regarding their Dad being an astronaut, they replied: “We miss him a lot, but we get to face time with him.”

After the talk, Col. Bresnik and his wife posed for pictures and handed out colored, 8 X 10 autographed pictures to the fans. A young girl was fortunate to get the commander’s signature with the writings “Dream Big Dreams” on the flightsuit she wore after telling him that she would like to be an astrophysicist and a president someday. A boy brought a model of a spaceship he made for the astronaut to sign. Mine read in Latin “Ad Astra!” meaning to the stars.

For the standing ovation finale, a video of ISS traveling around Earth was shown to the music of Simon and Garfunkel’s “Sounds of Silence” performed by Disturbed. Col. Bresnik was presented two, rare, NASA books by president Bienstock and in exchanged, the MO received a beautiful, picture collage signed by him and the other two Expedition 53 crew, Russian Cosmonaut Sergei Ryazansky, European Space Agency Paolo Nespoli from Italy with a souvenir of a small American flag that traveled with them.
Later on that evening, there was a stargazing party lead by Prof. Sean Tvelias and Dr. Mike Inglis of SCCC at the Ross School in East Hampton where MO’s 20” Meade telescope is housed. One exciting stargazer ran towards me and said: “There’s a real, live astronaut around!”

Kudos to President Bienstock for inviting the Bresniks to NY and to MO’s Director Donna McCormick, husband Jeff Katz, volunteers, sponsors, all the businesses who contributed generously, members and friends of the MO for making these two events a great success!

For more info and other future events on the MO kindly e mail MontaukObservatory@gmail, check the website MontaukObservatory.com or write to P.O. Box 3095, East Hampton, NY 11937. Donations are always welcomed to these free events.