Dan Nevins, a highly decorated United States Army Veteran with bilateral prosthetics, was the honored guest and spokesman for the Wounded Warrior Project at an oceanfront concert at Gurney’s Inn Resort and Hotel on Sunday, August 16. Mr. Nevins lost his left leg while deployed in Iraq and after over 30 surgeries and a bone infection, his right leg was also removed. Afterwards, Mr. Nevin has climbed Mount Kilimanjaro. “There is nothing I can’t do;·he told a group of children on the beach, whose parents brought them  over to meet and  thank him. “My feet never hurt;’ Mr. Nevins added. “I can walk on fire or hot coals, it doesn’t hurt at all. That’s the silver lining; he told them. “I was in combat in Iraq. My legs were hurt so bad they couldn’t fix them, so they took them off. It’s all good;’ he said. Now, he told the kids he is doing “awesome: ·”When something happens and I can’t control it, I have a choice to be sad or I can choose to make the best of it; he explained.

Mr. Nevins found yoga to be highly beneficial to him, mentally and physically, and then became an instructor. “I teach all over the world,” he said, “I tell stories about leadership and overcoming adversity.” He also led a class that included meditation at the oceanfront resort the morning before the concert. 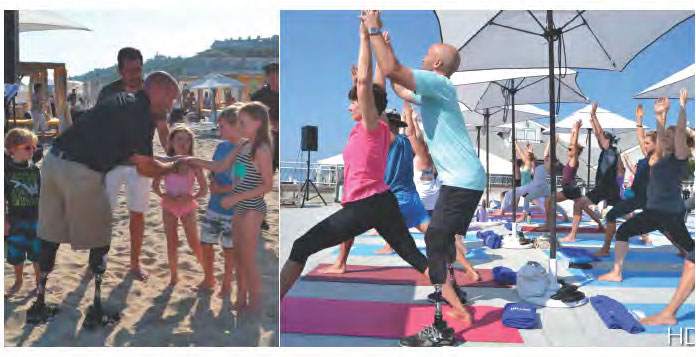 Mr. Nevins feels strongly that modern yoga fits in perfectly with the WWP’s mission to honor and empower warriors. They are in the early stages of a national program, he said, and he is guiding them toward the right partners. “There are so many styles;’ he said, and he feels itis important to offer a practice that fits the military lifestyle. “Power Vinyasa yoga,” he said, “it’s wholeness…everybody in the world should be doing it”

“!love yoga, it is part of my passion,” said  Alissa Striano of Inside Out Public Relations, the organizer and one of the event sponsors. She had decided to invite Mr. Nevins to Montauk after first hearing of him. She was already impressed with the fitness component of Wounded Warrior Project programs after being introduced to Soldier Ride the Hamptons in 2009. Ms. Striano took Mr. Nevin’s yoga and meditation class on the beach and said it was very moving.

The fundraising event Ms. Striano orchestrated was “a perfect union” of groups with well-meaning intentions, she said. The Easthampton YMCA, who provided dozens of volunteers for the event, is looking to work more with Veterans, Gurneys wants to pay back to the community, and after hearing Nancy Atlas sing the Johnny Cash song “Like a Soldier” in Soldier Ride, The Movie, she knew who would play.

The Nancy Atlas Project kicked off the Sunday afternoon beach concert with a reggae tune and Ms. Atlas led the audience to the raffle table after putting a fistful of her own tickets in. There were many generous prizes, from businesses in both Montauk and New York City. Ms. Atlas won the coveted grand prize, a camouflage stand up bamboo paddleboard.

Those who could not attend, but are still interested in supporting the initiatives can also donate at woundedwarriors.splashthat.com.