Perched at the end of Duryea’s dock, Montauk was treated to the view and- if you timed it right- a tour of the OCEARCH boat as it prepared for its 26th shark tracking expedition. We were fortunate to have an opportunity to speak with Chris Fisher and to have a tour of the boat by TJ, a young artist who went along to assist the crew and paint a mural while out at sea. 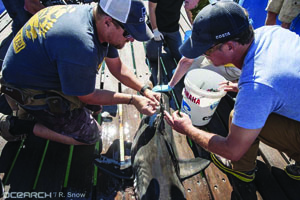 The entire team was welcoming and eager to share their information and floating office/home with us.  We got an up close view of the impressive moveable deck attached to a hydraulic lift, it is used to get the sharks on board and can a hold 70 thousand pounds.

For nine years, Chris and his crew have been tagging sharks around the world functioning as an inclusive and open source- servant to scientists in the ocean. They are engaging and advancing science while welcoming the community to be a part of the exploration through live face book footage https://www.facebook.com/OCEARCH/ and on-line shark tracking. http://www.ocearch.org/ 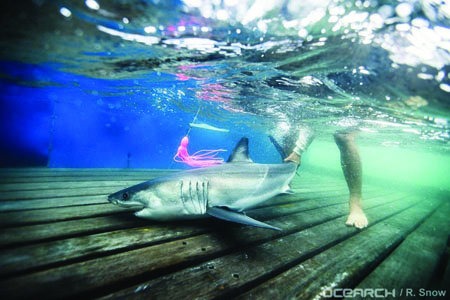 “Not only will this expedition benefit New York in terms of helping change the perception of sharks from that of fear to one of curiosity and fascination, but it will allow the rest of the world to follow along on the Global Shark Tracker and learn about sharks at the same time as our scientists,” explained Expedition Leader Chris Fischer 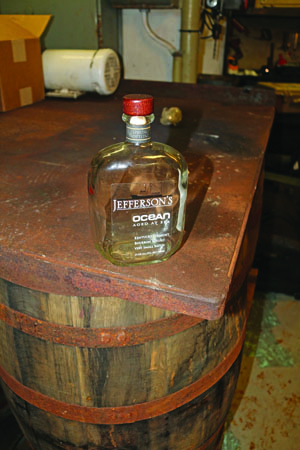 Ocearch, founded by Chris Fischer, a former television host, has embarked on 25 previous expeditions worldwide, tagging hundreds of sharks, including five on the East Coast, since 2007. But this is the first time Ocearch has set its sights on the New York Bight. The bight is a stretch of the Atlantic Ocean between Cape May, N.J., and Montauk Point on Long Island. The theory is that this stretch of coastline serves as a breeding ground and nursery for great whites, and the goal is to prove it. 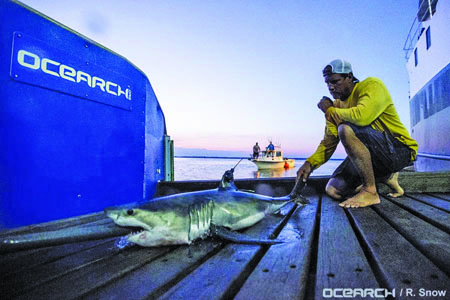 As Chris explained it, sharks are the big balance keepers of the ocean and we need to keep them alive for food chain management. The sharks keep the squid down, if not the squid eats all of the baby fish that we need to mature in order to sustain fish for our future.  A white shark takes 20 years to mature by tagging and studying the small ones, they will gather critical nursery information. 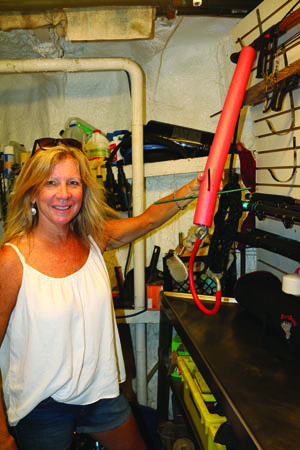 “OCEARCH operates in a collaborative, inclusive, and open source environment to enable local scientists to achieve previously unattainable data on mature oceanic apex predators.  We bring together world-class fisherman with leading scientists where they are provided unprecedented access to large animals such as white sharks for approximately 15 minutes during which they conduct approximately 12 studies. More than 50 leading researchers representing over 20 collaborative institutions to date have been enabled by OCEARCH expeditions, which are powered by CAT (Donated & Maintain Motors).”

Ocearch gets everyone on one team by building collaborative teams with individual scientific focus, not individual agendas. With the help of corporate sponsors and private funding- he open sourced it, Chris states that it’s his boat, but everyone owns it. And it benefits many institutions at once including the public.

This is obviously a passion for Chris, he wants the public to understand that we need to know where our fish go to help crack the code and manage toward balance for our future. All sharks in all different environments need to keep balance in their system. He came up with the idea to find a place in the middle of the problem of losing our fish. The focus of the team is data driven, not activism. In 2012 they open sourced the expeditions with a content team to shoot and cut footage on board and allow everyone to see the exploration in the NOW. In addition, they have educators like Lindsay and Amanda working with the team and building educational programs and school fund-raising programs, like Change for Fins. [education@ocearch.org] 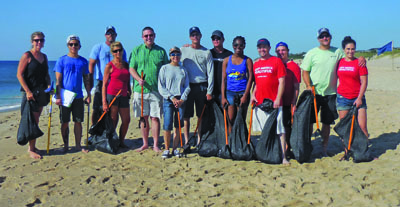 For over two weeks, members of Ocearch- the shark-tracking organization led by Chris Fisher and Captain Brett McBride- along with scientists from the involved agencies, set out in hopes of capturing and tagging sharks in our area. In addition to applying the tags, the team is also taking blood samples and conducting muscle biopsies, with the goal of having the shark on and off the lift in under 15 minutes.

After tagging few various types of sharks, on the evening of August 18th as the sun was setting they tagged ‘Montauk’ a female White pup. Then early the next morning they tagged the first male ‘Hudson’. I was even fortunate enough to see these two on the live face book feed. Over the duration of the expedition they tagged and released nine great white pups, two females and five males: Montauk (F), Hudson, Gratitude(F), Teddy, Gotham, Paumanok, Hampton…the other two will be revealed on the site as they ping long enough to show their location.

Finding and tracking Great Whites off of Montauk was their goal, and now, the team said it’s made history with the discovery of the birthing site.

“Definitely the nursery, likely the birthing site,” Fischer said. “Probably the most important significant discovery we’ve ever made on the ocean.”

Chris also told us that white shards are skittish and stay away which makes the task more difficult. “People shouldn’t be terrified of Great White Sharks, they should be terrified of No white sharks for our future.”

Visitors to Ocearch’s website can track the sharks tagged by the organization, which also has a tracking app available.

Great white sharks, while not protected under the Endangered Species Act, are covered under a number of federal laws and regulations. Pinpointing this nursery’s location could help establish further restrictions aimed at protecting the species.

In addition to the expedition, Ocearch teamed up with Keep America Beautiful and Ocean Conservancy to host a Kirk Park Beach Clean-up on Saturday August 27th. Later in the afternoon, Chris Fisher also did a public “Ocean First” lecture at the Sag Harbor Whaling & Historical Museum.