It’s been ten long years, since the Montauk Observatory’s 20″ the first of its kind, research grade professional, Meade RCX400 telescope made its public debut on November 20, 2006 at the Theodore Roosevelt County Park at Third House a/k/a Montauk County Park. When President and co-founder of the Observatory, Terry Bienstock, CEO of World Extend asked this reporter if I would like to cover the placing of the Home Dome Observatory into its permanent site, I was honored. 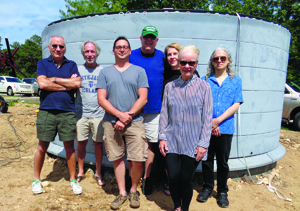 The mission of the Montauk Observatory, a not-for-profit organization, 501(c)3 and privately funded are two-fold, according to Pres. Bienstock ” First, is to provide free year round educational programs , including astronomy lectures and planetarium shows and discovery programs via the internet. Second, is to build a state-of-the art observatory on the East End of Long Island to access its dark skies.”

According to dark sky advocate Susan Harder, “The idea of having an observatory built started in my Springs dining room home when members of the board, then President David Larkin, Terry Bienstock, Matthew Putman, Sean Tvelia, Advisor Michel Inglis and John Imperatore and I first met in 2005. “The Town of East Hampton had just embarked on guidelines about outdoor lighting codes to protect the East End’s natural resource-a clear view of the sky-by reducing light pollution.”

I still remember the first lecture held at the Montauk Library on April 20, 2007, given by NASA Ambassador and Professor of Astrophysics Mike Inglis of Suffolk County

Community College, (SCCC) on “The Theory of Black Holes.” Dr. Inglis explained the existence of black holes through the actions of other stars and planets and a slide presentation of beautiful images of our solar system, other galaxies and exploding stars were shown.

After the lecture, the group, drove to the free of light pollution, designated Dark Sky Park for a perfect stargazing night where we “ooohed” and “aaahed” as Professor Sean Tvelia of SCCC and Dr. Inglis rolled out the 700lbs telescope from a wooden shed. We saw up close and personal Saturn and its rings, Venus and the Milky Way, which I always thought were just a bunch of clouds. From that moment on, my husband and I were hooked and became good friends with the professors who were just as excited and took images of Saturn for the first time through the telescope to share with the world.

For a while, the group had hoped that the observatory would be up and running after a year of purchasing the telescope but getting permits to build the observatory was slow going and frustrating even with all the necessary historical building requirements, expensive blueprints, and the assurance of the Suffolk County that a permanent site at the historical Park would be approved.

President Bienstock and Past President Larkin who purchased the telescope along with the help of Southampton Supervisor, Jay Schneiderman, then Suffolk County Legislator, Assemblyman Fred W. Thiele Jr., and other members tried their very best to obtain the building permit but was unsuccessful.

Obtaining the dome was much easier. According to MO Director of Programs and Publicity Donna L. McCormick formerly President of Custer Institute, “Contractor Thomas Frey contacted me in 2011 to find out if Custer was interested in obtaining a 180 square feet home dome manufactured by Technical Innovations that was being removed from a house being renovated in East Hampton.”

“Board member and husband, Jeffrey Owen Katz, formerly  research and Observatory Director of Custer had planned to use it for his internship program for students.” A year later, after Custer did not get the dome up and running, Director McCormick made a proposal to donate it to the MO and it was accepted.

In spite of many bumps along the road, the group never gave up in search to find a permanent home for the telescope. They met wherever they found a venue that would welcome them to hold the bi-monthly lectures at the Montauk Library, Montauk School, Montauk Playhouse, Amangansett Library, Custer Institute in Southold and Ross School in East Hampton.

Regular MO lecturers such as Dr. Dava Sobel, Matthew Pappas, Thomas Madigan, Glenda Denicolo, and especially Dr. Mike Inglis and Prof. Tvelia deserve some recognitions for their loyalty and patience including the wannabe astronomers who followed the group. At the stargazing parties Prof. Tvelia had to use a 10″ telescope one of ten owned, since the 20″ was too cumbersome to transport from Montauk.

This past June, a round concrete foundation was poured adjacent next to the Tennis building, thanks to Contractor Frey and his crew Carlos Bernal, Sergio Herbel, Edwin Cardona and Rudy Cardona who volunteered many hours to make the MO’s project succeed. Not to mention hauling the dome from East Hampton home to Custer, back to Montauk, then back to East Hampton.

On the 4th of July week, the 15-foot wide and 12-foot high made of plexiglass Home Dome was assembled and placed on the foundation. Since the telescope and dome have been in storage for so long, funds are being sought to replace the old motors and rusted parts. Once finished, according to Director McCormick, “the next plan is to add a facing to the exterior of the lower base to blend it with the Center and other building on campus.”

Hopefully, the Meade telescope will be at its permanent home at the Ross School Tennis Center at 20 Goodfriend Rd., to watch the Perseid Meteor Showers on August 4 at 8:30p.m. For more info and future events, visit: www.montaukobservatory.com.