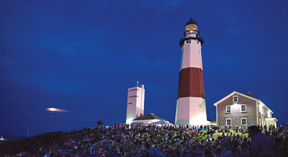 A fundraiser for the Montauk Lighthouse “Montauk Music Festival Rocks the Lighthouse” became a moment in history that won’t soon be forgotten. After planning the concert for a few months, and feeling good about the bands and other arrangements for our first Lighthouse concert, I received a call from Jasper. My friend Jasper is the talented drummer in the Montauk Project, and also Kate Usher and the Sturdy Souls band. He’s also a contractor who

happened to be doing some work for Paul Simon. So, the story goes that Jasper and Paul were talking one afternoon and they began discussing the concert, and then Paul said that he’d like to come and play a few with the Montauk Project. That phone call changed the entire scope of the show, as well as the experience for all involved.

From the beginning, Paul wanted to keep it quiet. He really wanted it to be a community event, one to which he could add a little something extra – for the community. Of course I agreed, and for a few weeks prior to the show we worked out the details without telling anyone of our plan. Even the band was in the dark until two weeks prior when they had a rehearsal

with Paul. We were at the Shagwongs the week before the concert when Jos,h the guitar player for the Montauk Project, walked in after rehearsal. He walked over and said “I can’t believe it.” He spoke no other words since he knew I was the only other one on the planet that

knew. He walked through and left, probably went home to listen to the songs they were practicing that night for the concert. It wasn’t until the Thursday night before the show that the Historical Society committee was filled in- and then we slowly started telling friends with the condition that they could pass it around, but no social media, no Facebook!

Well it was great, the word got out the old-fashioned way, without the internet. By Friday night we had tripled our ticket pre-sales and we knew that it was going to be a night to remember.

Paul Simon and his wife, Edie Brickell, are gracious, soft spoken, Montauk loving people. We enjoyed meeting and chatting with them, and of course having them be a part of the benefit concert. I was fortunate to have driven Paul home from the sound check on Saturday afternoon. As we drove he was saying that he really liked that this was going to be a real community event. The sound check was a treat to lighthouse visitors, workers, show volunteers, as well as 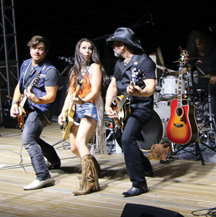 the other bands. Especially Tuatha Dae who jumped at the opportunity to havea few of their members join in when Paul asked for more percussion. During the sound check I was able to see the master at work, he directed the bands performance by using simple hand signals,a few words like ‘harmony’, and a face to face with Josh. You could see the connection, a true conductor. Such a gift for me to witness, it truly was an extraordinary experience on many different levels.

As I escorted Paul and Edie to their seats to watch the show, many people said hi and they were so kind offering a short conversation or handshake. Actually, they were the same way throughout the performance and even on the way out.

If you were at the show you experienced that special moment when the moon was trying to shine through the clouds, the cool breeze was gently blowing off the ocean, the crowd got to their feet in anticipation, Montauk Project and guests stepped onto the stage and… Paul sauntered in from side stage and the crowd went wild. A

magnificent greeting from our community towards one of its honored members. He sang, Jasper and the boys relished the experience and played as if it was something they did with Paul Simon every Saturday night, and the members of Tuatha Dae added their special touch. Even the moon showed up in full force. We sang along to ‘Late in the Evening’, ’50 Ways to Leave your Lover’, ‘Me and Julio Down by the School Yard’, and ‘You Can Call Me Al.’ When it was over and Paul thanked Montauk and left the stage- concert goers, whether they expected him or not, realized they had received a very special treat.

I can’t thank Paul Simon, Edie Brickell and Jasper Conroy enough for their generosity. We raised money for our Montauk Lighthouse, had a lovely evening on the hill overlooking the ocean with friends and family, and of course wonderful entertainment by the three bands as well as Paul Simon’s pop-up band’s performance!!!