Some people have high school or college friends they may keep in touch with yet. But how many of us are fortunate enough to remain in touch with friends we met in kindergarten? Seven decades later my own kindergarten friends and I have retained that strong bond. Growing up in the Bronx back in the 1950’s we could walk to our friend’s house and not need to be driven. We could go outside to play and find a dozen friends that lived on the same street to join us. School and church were within walking distance, too. Those were the days! After 8th grade graduation most of us went to the same high school, but had to 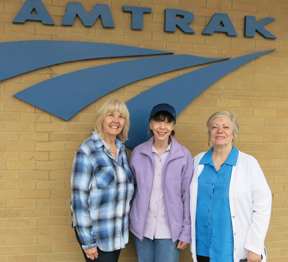 take a city bus to get there. From my kindergarten days at P.S. 3 there are five dear friends I have kept in touch with over the years. One friend, JoAnn, moved away after eighth grade when her family bought a house on Long Island. Another friend, Dianne, like me, still resided in the Bronx and went to the same high school. In junior and senior years we also went on double dates with our boyfriends that also became friends. Years later, my husband and I were in their bridal party.

Reunion
Fast forward to 2017, Dianne, JoAnn and I are still close friends. Over the years before email, we kept in touch by letters and phone. JoAnn had now moved to Lockport, N.Y. near Niagara Falls with her husband, Earle, after they graduated from SUNY Buffalo. That’s where they raised their two sons and still live. Dianne and I were also busy with our lives and family, moving to the same suburban area where we bought homes. JoAnn and I attended Dianne’s daughter’s wedding some twenty years ago and hadn’t visited since. We three girlfriends kept in touch, yet somehow never finding time to travel the distance to visit each other. We would promise to, but years passed and the reunion never happened. Life and family kept us happily busy. Now we were retired so it was time to take action and plan a visit! For years JoAnn had invited us up to their home in Lockport, N.Y., near Buffalo, for a “girl’s reunion”. Too far to drive, we decided to take her up on her wonderful offer and made Amtrak reservations. It was the first time Dianne and I took such a long trip by train and it worked out perfectly. Leaving spouses behind, we were on our way and ready for an eight hour comfortable and scenic train ride to the Buffalo/Niagara area. We were met at the station by JoAnn and Earle to begin our four day excursion and reunion together!

Touring
Like professional tour guides, JoAnn and Earle packed so much into our visit. Before retirement, both were teachers and their dissertations were entertaining, engrossing and interesting to hear about upstate New York history we read in textbooks. The morning after our arrival, JoAnn packed sandwiches for a picnic in the most unique spot imaginable. Driving there our friends pointed out what we were passing, including Krull Park on Lake Ontario, where there is an old fashioned amusement park with nostalgic rides still only costing visitors a quarter ride! The drive continued to historic Fort Niagara in the town of Youngstown, passing lovely ante bellum estates, complete with wrap around porches. Each area we passed was accompanied by lively, fun “factoids” by our friends, often with humorous inserts by Earle to keep us ladies laughing. Finally we arrived at our picnic destination, the New York Power Authority Niagara Power Project Plant. This is a huge facility whose official name is The Robert Moses Niagara Hydroelectric Power Station, located along the Niagara Gorge. A Visitor’s Center features interactive exhibits about hydroelectricity and its history in the Niagara Frontier. We ate lunch in a huge glass enclosed dining area, open to the public and free of charge. After eating we walked outside on the veranda that overlooks the water filled gorge from an unbelievable height. It was a magnificent feat of engineering to behold and admire when looking at this massive structure below! Inside the huge complex is the Power Plant Museum, filled with scientific exhibits suitable for both adults and children, with many hands-on displays about geology of the area and how the power plant operates. The first exhibit we saw was a 3 minute movie that showed “the process of water power turning to electric”. Inside there were 12 seats, lined up like a movie theatre. It was a FUN film with sensorial events to coincide with the film! The plush, leather chairs moved and rocked when it was a bolt of electric, mist filled the air and squirts of water lightly fell on us. Lights flashed to demonstrate the electric current. All of us were laughing and it was a fun, unexpected film, making us feel as if we were on a school trip back in grade school! After the film we viewed the rest of the museum, which included rock formations and other exhibits relating to the power plant. Then it was off to Niagara Falls!

The Falls
Earle bought us tickets for a trolley ride around Niagara Falls Park. The 15 minute ride went past Goat Island, Rainbow Bridge and passed the Grand Island Bridge that crossed to Canada. Next we walked down the concrete staircase to be closer to the roaring water of the falls. Below this magnificent wonder of nature we could see the famed Maid of the Mist cruising slowly closer to the cascading falls. Not enough time to enjoy this ride that day, it’s on the list for our next visit to this majestic sight. After the Park our day was not over. One more sight-seeing venture took us to the inside of the Buffalo Philharmonic Orchestra Hall. Our friends are frequent visitors there and named the fabulous productions and famous performers they have seen. Now it was time for dinner and JoAnn took us for lobster surf and turf. It was a perfect ending to a perfect day! Well rested the next morning we were off to another day of touring and today the city of Buffalo was on the agenda. This is where JoAnn and Earle went to university and they knew the area well. One of my very favorite parts of this excursion was our drive to the Buffalo and Erie County Naval & Military Park. http://buffalonavalpark.org/. It’s a museum on the shore of Lake Erie and home to several decommissioned US Naval vessels, including the Cleveland-class cruiser USS Little Rock, the Fletcher-class destroyer USS The Sullivans, and the submarine USS Croaker. All three vessels are open to the public for tours. Along with the ships, there are a variety of smaller vehicles, vessels, and aircraft are also on display at the park. When I saw the S.S. 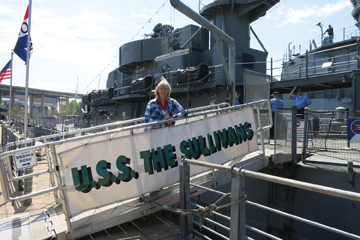 Sullivan I explained to my friends that it recalled a wonderful memory for me and made me a bit sentimental. As a child I would watch old movies with my dad and one of his favorites was 1944 film, The Sullivans. This true, but sad story is about five brothers that served on the same ship during WWII. They lost their lives in the Pacific theater and after that the military Sullivan Law was passed that did not allow siblings to serve on the same vessel together. Standing next to this giant vessel I began talking pictures of it, capturing the name of the ship in each photo. On the gang plank leading up to the deck, where visitors walk, there was also a sign naming the ship. Earle seeing my nostalgia and clicking away for over a dozen photos, suggested he take some of me on the gangplank, pointing to the sign. I now have some touching, memorable pictures of that day with me on the S.S. Sullivan gang plank.

Last day
On the day before our departure, Joan had one more excursion, adding, “Visitors can’t come to Lockport without visiting the locks!” And she was right. Another amazing feat of engineering! This was the first time I saw a lock up close and as we admired this unique structure, JoAnn explained the locks and importance of water travel in the earlier days on the Erie Canal. On the evening before our departure our after dinner conversation was revisiting our P.S. 3 childhood days. Looking at an 8 x 11 black and white photo JoAnn had of our graduation class, we had fun trying to recall names and memorable traits of former classmates or teachers. Our conversation once again turned to our elementary school days as we three recalled the weekly school assemblies we had back then. Although it was a public school, on “assembly day” students were required to wear navy blue slacks and white shirt for boys. Girls had to wear navy skirts and a white blouse. All had to wear a red tie, too. Students said The Pledge of Allegiance, and then sang the National Anthem. At the end of the day’s assembly and presentation, we ended with the P.S. 3 Alma Mater. Within minutes of this reflection, we three simultaneously tried to sing the song again. We remembered it, with some slight deviations here and there. JoAnn’s husband Earle, watching us laughing and being school girls once again, said “You should sing it again and I’ll record it”! So we did. There we were, the three of us singing the theme song to our beloved, P.S. 3 once again! Earle surprised each of us at the end of our trip with a copy of that video on a DVD as well as a mini photo album he put together for us of the photos he took during our touring. JoAnn presented us each with a gift of an oversized Bible with golden edged pages and “large print”. Who could imagine that so many decades later we’d still be closely connected, enjoy each other’s company and remain such dear friends? It was a wonderful reunion, mini vacation and our treasured friendship remains strong in each of our hearts. Not long after the trip I came across this quotation, author unknown, and it is absolutely perfect to describe our friendship. A good friend, like an old quilt, is both a treasure and a comfort.