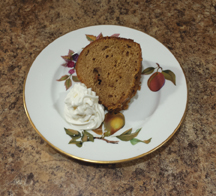 What do I mean by “better than old-fashioned” applesauce cake? Well, I remember applesauce cake when I was growing up as a very dense, unsweet, and, quite frankly, flavorless confection. Nobody looked forward to it. If it weren’t for “Cool Whip” I don’t think neither my brothers nor I would have eaten it at all…and that’s saying a lot.

Well, the big jars of applesauce were on sale at the local supermarket. Being a bargain hunter, I couldn’t resist. But now, what to do with all this applesauce? After I opened a jar and had my fill, I new it would end up in the back of the fridge until it went bad if I didn’t use it right away. All I could think of was applesauce cake…but I had to make it lighter and more flavorful.

After a try or two, I came up with the following recipe. You’ll notice that it has a lot of cinnamon and baking powder…yes, that’s tablespoon, not teaspoon. I also added salt. It acts as a flavor enhancer. 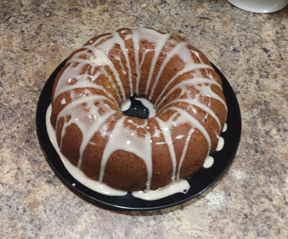 Those changes took care of the heaviness and lack of flavor from the original recipe. This cake comes out with a light, yet moist crumb and is full of cinnamon flavor. One important tip…if your cinnamon has been sitting in your cabinet for a year or more, invest in a new jar. The store brand is fine. It doesn’t need to be expensive, just fresh. Believe me, it makes a difference.

This is the perfect cake for “add-ins” like raisins, nuts, dried fruits, apple, etc. Experiment! I used up my raisins on my first “experiment” so I used a diced apple. Before anyone asks, everything from my columns is eaten.  Nothing goes to waste…it all goes to “waist” and that’s getting easier to see every day. LOL! Enjoy.