There is always something going on in the Hamptons and the summer months are especially busy with benefits, fundraisers, concerts, children’s programs and of course film premieres presented by the Summerdoc series or other venues. One such event was as a special screening held at the cinema in East Hampton of Hector and the Search for Happiness. Hosted by East End resident, Gwyneth Paltrow and the film’s star, Simon Pegg and director Peter Chelsom, it was an opportunity for a sneak preview of a film to be released later this month. 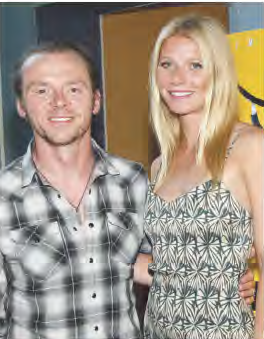 Who is Hector and what is the film about? Hector (Simon Pegg) is a quirky psy-chiatrist who has become increasingly tired of his humdrum life. As he tells his girl-friend, Clara (Rosamund Pike), he feels like a fraud because he hasn’t really tasted life, and yet he’s offering advice to patients who are just not getting any happier. So Hector decides to break out of his deluded and routine driven life. Armed with buckets of courage and child-like curiosity, he embarks on a global quest in hopes of uncovering the elusive se-cret formula for true happiness. And so begins a larger than life adventure with riotously funny re-sults. Based on the world-wide best-selling novel of the same name, Hector and the Search for Hap-piness is a rich, exhilarating, and hilarious tale from director Peter Chelsom, starring Simon Pegg, Toni Collette, Rosamund Pike, Stellan Skarsgard, Jean Reno and Christopher Plummer. Following the screening a cocktail reception was held at the Ser-ena & Lily Beach Market Simon Pegg and Gwyneth Paltrow. Photo Courtesy: Adriel Reboh, Patrick McMullan Company.