I found “Fish Tales” a discussion with Montauk’s finest fishermen and women to be very informative and fascinating. Kudos to moderator and freelance writer, Debbie Tuma, who grew up in Montauk, the niece of legendary Capt. Frank Tuma Sr., and daughter of the the late Capt. Bob Tuma of the boat Dawn for keeping Montauk’s fishing history and their legendary figures alive.
The panel consisted of Perry (Chip) Duryea III, Bonnie Brady, Captains David Aripotch, Julie Evans, Joe McBride, and Anthony Sosinski. Greatly missed were captains Frank Tuma Jr., Vincent Grimes and the late David Krusa.

Ms. Tuma asked the guests several questions including their favorite and memorable fishing experiences and how they discovered Montauk, now known to be a fishing capital of the world.

Joe McBride who is long-time past President of the Montauk Boatmen and Captain’s Association of charter boat captains recalled catching a 780 lbs mako shark one summer off his charter boat, My Mate. “It was pure luck!” he humbly told the audience but us wannabe fishermen know better. He also briefly alluded to the famous movie “Jaws” by Steven Spielberg who’s character Quint was based on Montauk’s fisherman Frank Mundus who in 1986 caught the largest fish by rod and reel off the boat Cricket II, a 3427 lbs shark. My husband and I were fortunate to have met Mr. Mundus the summer of 2008 just before his passing. 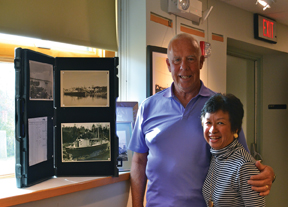 Perry (Chip) Duryea III spoke about the ups and downs of his family owned, recently sold, Perry B. Duryea & Son Lobster business, and brought priceless pictures of what fishing in Fort Pond Bay in 1912, 20’s and 30’s was like including prices of 2 1/2 lb sword fish for $1.13, and 6lbs sea bass for $1.50. He said: “When Montauk’s lobster wained in the 90’s due to the water’s high temperature, lack of oxygen and pollution, lobsters had to be brought in from Canada and Maine for the business to survive.”

Anthony Sosinski, an offshore lobsterman on his boat, Anna Mary and dragger Donna Lee, just got off at 4am that morning to attend the event. He was very passionate in explaining the plight of being a captain and the rules and regulations that has been mandated to the commercial fishermen of Montauk. He and captain John Aldridge are co-authors of the recenty published book “A Speck In The Sea: A Story of Survival and Rescue” based on their 2013 harrowing experience.

David Aripotch with wife Bonnie Brady, Executive Director of the Long Island Commercial Fishing Association recalled their own personal experience when their boat Caitlin & Mairead took on water during the winter 2013. Ms. Brady still kept their texts communication between them and read it to the audience not knowing whether she would see her husband alive again. They also fondly remembered the good times shared with fishing buddy captain David Krusa who was represented by his wife Stephanie.

Julie Evans and her late husband Mike Brumm owners of charter and commercial boats know what fishing is all about. Ms. Evans wrote a local fishing column and is a candidate for East Hampton Trustee.

Hopefully there will be more discussions and meetings in the near future regarding Montauk’s fishing industry since many Montauk families depend on it. A big thanks to Library Director Denise DiPaolo, Maura Feeney and Sally Krusch for making this program possible.