A few hundred firemen and community members gathered at the Montauk Firehouse on October 22, to pay tribute to the life of Craig Tuthill, an ex-chief and 63-year member of the Montauk Fire Department. He died on August 19 of heart problems, at the age of 80. 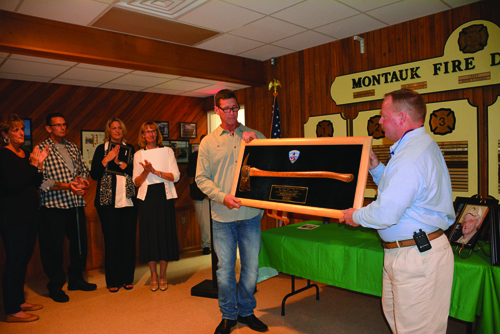 Tuthill’s family of five children—Lorraine Shott, Carolyn Cox, Jacquelin Tuthill, Stephen Tuthill and Edward Tuthill, organized this celebration, along with the firemen who served with him for many years. His other son, Douglas Tuthill, is deceased.

“He was also the Grand Marshal for our 75th Anniversary.”

Former East Hampton Town Police Chief Ed Ecker, another firemen, who emceed the event, praised Craig Tuthill for being kind, caring and compassionate, and always willing to do anything for anyone. He talked of all the things Craig did for the Montauk Fire Department, including directing traffic for the annual Montauk Triathlon, fighting fires, helping with the Big Bucks Raffle, and also being an active member of the Montauk Ambulance Squad and Fire Police.

Chief Lenahan also presented the Tuthill family with two proclamations from the Town of East Hampton and from Suffolk County, honoring him, and he also presented them with a gold ax, framed in glass, from the Montauk Fire Department.

He said that one of Craig’s passions was volunteering at the Firemen’s Home in upstate NY, which houses firemen with no place to live. So to honor Craig, the Montauk Fire Department donated $1,000 to this home in his name.

During the open mike session from the audience, Joan Lycke, a long-time friend of Craig Tuthill, talked of how they graduated in the same Class of 1955 from East Hampton High School. She remembered his parents, Francis and Ellis Tuthill, who owned the Montauk Lumber Yard, and were also involved in the community.

Growing up across the street from his parents, on South Fairview Avenue, I remembered seeing Craig over the years and then became friends with him when he took over their house after they died. He was helpful to all his neighbors, loved to fix things around the house, and loved to make his famous waffles. His house was full of photos of his children, 9 grandchildren and 9 great grandchildren, whom he loved to take fishing.

Craig Tuthill, who was also the Grand Marshal of the Montauk Friends of Erin’s St. Patrick’s Parade in 2010, will be missed by the Montauk Fire Department and by all of Montauk, as truly one of the great “locals.” We will also miss his famous “Hey Babe.”