St. Augustine, Nights of Lights, for the Holidays!

If there has ever been a perfect place for the holidays it must be America’s oldest city,  St. Augustine. Even before Jamestown or the Plymouth Colony, the oldest permanent European settlement in what is now the United States was founded in September 1565 by a Spanish soldier named Pedro Menéndez de Avilés in St. Augustine, Florida. Menéndez picked the colony’s name because he originally spotted the site on August 28, the feast day of St. Augustine. St. Augustine of Hippo, the patron of brewers, has been an inspiration to many who struggle with a particular vice or habit they long to break. The historic town has several unique breweries, ale houses, distilleries and wineries. 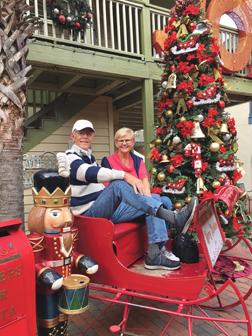 Christmas is my favorite holiday of the year. This  St. Augustine festival traces its origin back to the Spanish tradition of displaying a white candle in the window during the Christmas holidays. The tradition continues with some three million white lights twinkling on the wonderful old buildings and landmarks along the bay-front and throughout the city’s brick-lined streets. In 2020-21, St. Augustine’s Nights of Lights celebrates its 27th anniversary and the lights will be sparkling until Sunday, January 31, 2021. Nights of Lights made many top ten lists, including National Geographic’s, and is famous around the world for one of the Must Places to See.

We’d searched online for historic Inns to stay in St Augustine’s historic district and came across a few, but only one dating back to 1791. It is unquestionably St. Augustine’s oldest Inn, located in the heart of the oldest part of St. Augustine and is listed on the National Register of Historic Places. The Inn sits private on its own quiet corner and as we were soon to find out, its location is one of the most walkable spots of St Augustine. We fell in love with this unique place the moment we drove up the narrow brick-paved St. George Street and stepped through the wrought-iron archway into the walled garden courtyard. A serenely splashing fountained pond is fed from an artesian well at St. Augustine’s historic “Oldest House,” just a block away on old St. Francis Street. As soon as these old walls embraced these new arrivals we were ‘Inn’ and became part of its amazing history.

Holding on to wrought iron handrails we walked up two flights to the ‘Garcia’ suite on the third floor. On the way up on slightly drifting stair cases we passed by a larger balcony on the second floor with cozy rocking chair seatings, overlooking the courtyard gardens below. Our beautiful suite featured many of the quaint nooks and crannies found throughout the Inn, original art, antiques, some reproductions and bedding. Pulitzer Prize and National Book Award winner Van Wycks Brooks, and many other accomplished writers have resided at the Inn.   www.stfrancisinn.com 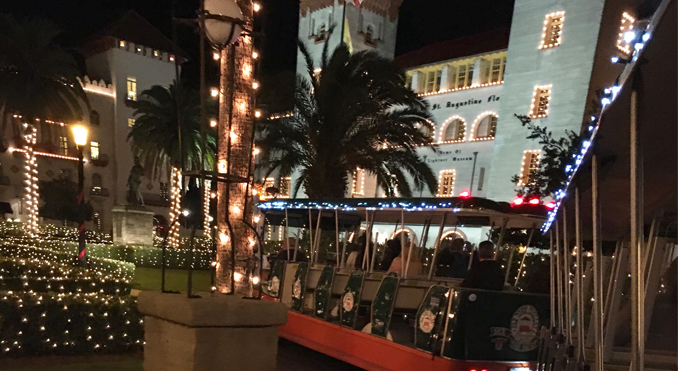 After a glass of wine and some snacks at the Inn’s evening Social Hour we decided to walk down George street to finally see the lights. Walking along George street at night would have been worth the trip alone, but arriving at the Old Town Square and seeing all the trees and buildings light up at once made me tear up. When we finally hopped on an Old Town Trolly Tour train, we became part of a ‘Holly Jolly Christmas’ ride. With the trolley benches separated by plexiglass we felt pretty safe and sang our hearts out and celebrated loudly ‘The Best Time of the Year’!  And in case you didn’t hear, by golly have a holly jolly Christmas this year!

We really enjoyed the baked oatmeal, hash brown pie special with ham and sausage, the 1791 granola and apple butter  (all made and baked in house) for breakfast the next morning in the main dining-room, while some guests had their breakfast in the courtyard. The towering trees provide cool shade here in the summer, and the gas fire pit is a favorite spot on a cooler winter evening! Though, cooler winter evenings here in Northern Florida are hard to come by. 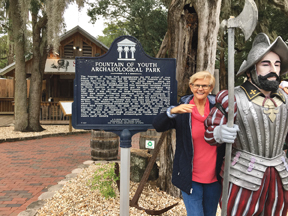 When we arrived at the Ponce de Leon’s Fountain of Youth Archaeological Park these seniors were good and ready to drink from the spring of eternal hope. The Spring House is a beautiful 60-year old coquina building that encompasses the original spring that was recorded in a 17th century Spanish land grant. With signed guest books going back to 1868, the Fountain of Youth is the oldest attraction in Florida, and the Spring House is the centerpiece of the historical Juan Ponce de Leon experience at the Park. The spring feeds forth directly from the Floridan aquifer, which lies below ground under much of North Florida. The water contains over 30 minerals and the spring would have been the perfect replenishment site for Juan Ponce de Leon’s ships upon landing on Florida’s shores 500 years ago. 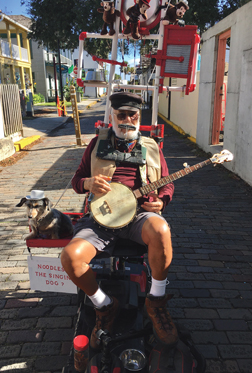 We had other amazing experiences here at the park, but can add briefly that we watched the most interesting presentations in the Navigators Planetarium and the Discovery Globe. We discovered an anchor that has been in the same location for decades, long enough for a cedar tree to grow around the fluke. And continued our tour with the Blacksmith Exhibit, Timucuan Village & Burials, Nombre de Dios Mission, 1564 Menendez Settlement, Excavations, Spanish Lookout, Canon Firing, Chalupa Boathouse, walked The Founders Riverwalk out on the water and finally hung out with the pompous Peacocks. www.fountainofyouthflorida.com

After a whole morning of walking the grounds of the Ponce de Leon’s Fountain of Youth Park we were definitely ready for a good lunch. St Augustine has dozens of great restaurants but we chose the St. Augustine Seafood Company on George Street at the advise of my dear friend Chef Walter Staib. Chef Staib, host of the long standing, national, multiple Emmy award winning TV show A Taste of History,  had filmed part of his show here in their backyard with their Executive Chef. We thoroughly enjoyed the fresh oysters, grilled mahi-mahi and flounder with some creative sides. www.saseafoodco.com 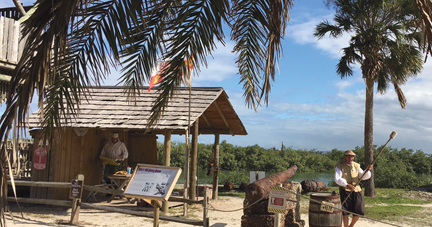 After lunch we hopped on the Old Town Trolley for a history tour all over town. We learned a lot about St. Augustine and why it holds a special place in America’s history as the oldest continuously occupied European Settlement in the continental United States. Another great thing about these trolley tours is that one may hop off and on at any previously announced stop and get to experience all points of interest at ones own leisure. We took the Stop at the The Oldest House, the oldest surviving Spanish Colonial dwelling in St. Augustine. The house site has been occupied since the 1600s, and the current house has been standing since the early 1700s. We were just steps away from the St Francis Inn and so we decided to take a break, freshen up and get ready for our dinner at The Columbia on George Street.

We were excited to dine at the country’s 10th oldest restaurant still owned by the founding family and operated by the fourth and fifth generations. The Columbia, founded by Cuban immigrant Casimiro Hernandez, Sr., is the oldest restaurant in Florida and the largest Spanish restaurant in the world and is now celebrating 115 years of continuous family ownership! Chosen by Southern Living Magazine as “Our Favorite Romantic Restaurant”, we had one of the most romantic, white table clothed, candle lite dinners in the South. The local Catch of the Day, prepared in Cuban style, was plenty and fresh, and the bread pudding to die for. Our waitress Amy, a brand-new mom of an 8 weeks old, served from the heart! www.columbiarestaurant.com

Our last night’s adventure was my husband’s idea. A 1 & 1/2 hour Ghostly Encounter Walking Tour! Advertised as: “This award winning, non-scripted walking tour will take you deep into St. Augustine’s Dark History. Meeting at 11C St. George Street we are in the most active haunted spots in the city…” I was certain that I would find quickly an excuse to skip out and wait somewhere for my hounted husband at one of the cute side cafes with a hot cup of cacao. Well, an hour and a half later when we were kissing each other next to a cemetery in the dark under, “The Kissing Tree”, no kidding. www.staugustineghosttours.net

My dear traveling friends, please don’t make the mistake and try to experience this history dripping, amazing city of lights just in a couple of days. There’s so much we had to skip, like The St Augustine Lighthouse, The Castillo de San Marcos etc etc, due to time restraints. Until next month from another interesting location!