I am sure we all have had these no-impact getaways that we enjoyed but have soon forgotten. And then there are those places, Montauk is one of them, that stick and you know that you’ll have to return some day. Regardless of whether you’re an extro- or introvert, The Bavarian Inn located in historic Shepherdstown, WV, voted one of America’s Coolest Small Towns, should have a priority spot on the bucket list of anyone that likes to have an exceptionally good time. Truth be told, we both agree that we had the time of our lives; considering that we are foodies (obnoxious at times), spoiled when it comes to neat, classy clean accommodations, he loves golf – I don’t, I love to hang out by the pool with a book while he wants to meet people and talk, but we both love adventures and adore history.

About an hour from Washington, D.C. lies Shepherdstown, a little village located along the Potomac River in the very Eastern Panhandle of West Virginia. Shepherdstown was chartered in 1762, which makes it nearly thirty years older than the United States, with the first settlement recorded in 1730. Thomas Shepherd obtained a land grant in 1734 and was soon followed by other settlers, many of which were German. There was a German school in Shepherdstown as early as 1762 and the main street to this day is named German Street. Many of the buildings were constructed before the Revolutionary War. Shepherdstown is a true blend of amazing history and modern wonders; historic German Street with cute shops, galleries, street cafes, wineries and breweries, Shepherd University, the C&O bike/hike path, nearby historic Harpers Ferry, Sharpsburg, Antietam Battlefield, Hollywood Casino at Charles Town Races as well as endless outdoor recreational opportunities all add to the allure of this old world location. 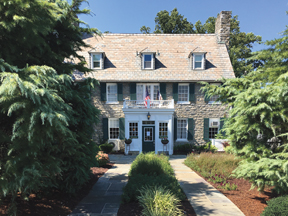 When we finally drove up to the resort that would be our home-base for the next three nights I got all choked up. I, myself, am an immigrant from Germany and The Bavarian Inn was the dream of two hard working immigrants who founded the establishment 43 years ago. As some of you might remember, I hosted the American Dream TV show in New York for over 15 years. I interviewed close to 500 interesting people during my time on TV, while Carol and Erwin Asam, natives of Munich in Bavaria and proprietors of the Inn, should definitely have been featured on my show “about people, their hopes, their dreams, their family heritage and their unbelievable realities”. Originally just a small restaurant in the main stone building with the family living above, we were in awe of today’s setting. Now Alpine style chalets, the Manor House and the stately Greystone Mansion perched high on a bluff overlooking the Potomac River. Its location is perfect for day trips, but the breathtaking views of the meandering river below convinced us to spend our first evening and the next afternoon in the infinity pool. 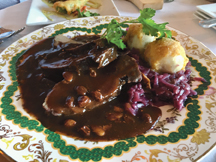 Our accommodations turned out to be the newly refurbished, classy-cozy Mansion Suite, two flights of stairs up in the Greystone Mansion where the Asams lived when Erwin was the chef and Carol the hostess. The mansion’s living room was the restaurant’s dining room; and they had five employees. —Our living room featured a cozy sitting area, the bath, double sinks divided by a makeup table with chair, a walk-in shower with subway tiles, cool linen sheets, fantastic views, flawless internet access and all the decorations and amenities that one might expect from a resort that has earned a AAA Four Diamond Award and Wine Spectator’s Best of Award of Excellence. In other words, we were delighted with our accommodations — and with our choice of dinner specials the first night, a to-die-for Sauerbraten with gravy, red cabbage and dumplings, as well as the Jagerschnitzel the third night. Jeff Ault, is the talented Head Chef of The Bavarian Inn. —The first morning I woke up to a bright orange light floating from the living room into our bedroom. I took a few photos of the beautiful sunrise over the mountains and river while my tea was brewing and then made reservations for breakfast on the patio outside. The toasted bagel with lox and fresh fruit plate was exceptionally creative and fresh. The service at any of The Inn’s restaurants was fabulous, and the staff was well trained. We found out later that the ladies and/or gentlemen get to wear a traditional Dirndl or the Lederhosen after a training period of at least 6 month and a proven record. 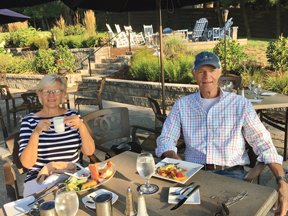 It was going to be a hot day and we’d decided to leave right after breakfast for our history tour to the Antietam National Battlefield, a National Park Service-protected area along Antietam Creek in Sharpsburg, northwestern Maryland, just a few miles north of the Inn. The site commemorates the American Civil War Battle of Antietam that occurred on September 17, 1862. The area, situated on fields among the Appalachian foothills near the Potomac River, features the battlefield sites and visitor center, a national military cemetery, Maryland Monument of the Battle of Antietam, Dunker church, Sunken road, Stonearch Burnside’s Bridge, a field hospital museum, just to mention a few. It was the bloodiest day in United States history, with a combined tally of 22,717 dead, wounded, or missing. Time for us to retreat and to get back to happier grounds. 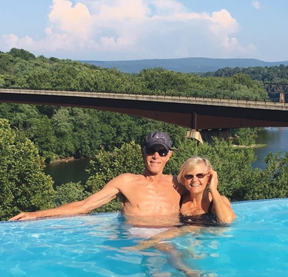 The Bavarian Inn’s Infinity 101 pool was magical, we don’t really know what it was, the jaw dropping setting, or the fun, diverse group of people, the ever flowing signature pool drinks, the fresh sandwiches or the Black Forest Cake with iced coffee from the Infinity 101 Pool Bar, or all of it, but every time we went we had such a great time. My husband, the talker, hung out for hours in the pool with Janice Regan, Teresa Taylor, the young family from Spain, the family with teens from El Salvador, and many others while Teresa and I got for a split photo moment a little closer with Adonis, his given name, and that’s how he looked. BTW, the Infinity 101 Pool and Pool Bar is perched on a cliff 101 feet above the Potomac River. —On our second evening we’d decided to have a light dinner al fresco on the patio. Fried Green Tomatoes, Curry Crab Soup and a Black & Blue salad (blackened chicken over greens salad with blue cheese). Once again, food, beer and service were excellent, but I was really tired after a whole day of excitement and fun and decided to go to bed early. My husband went on a little after dinner walk by himself. I had asked him to take a couple of photos of some things he finds interesting. He came back with photos of the Tesla charging station and the lit bridge!

We decided to have breakfast the next morning in town at Betty’s Restaurant (home of the world’s best sausage gravy), a diner from 1959, still in its original setting. Famous for their homemade sausage and chipped beef gravy, but we decided to take it easy and stay with fresh farmed eggs, home fries and toast with apple butter. Ms. Melinda hand-peels and cuts every week 150 pounds of potatoes, the eggs come from a local farm and the apple butter the local fire-department makes and sells every year during their annual fundraising event. Here we met the EMS chief with his daughter (it was her birthday) and two more town VIPs, born and bred in Shepherdstown; one who ‘owns’ the #1 Post office box and the second man box #1A —handed down from generation to generation. I wish I wouldn’t have lost the note with their names.

My husband had an 11am Tee-time that morning at Crest Creek, so we had to leave these nice local fellows behind. The Bavarian Inn has an exclusive partnership with the Club at Crest Creek for guests who love to play golf. Just a quarter mile from the Bavarian Inn, this 18 hole championship golf course is beautifully conditioned, challenging and scenic. Reaching to the dramatic Potomac River cliffs, the course is punctuated with glistening ponds, rambling streams, white sand bunkers, elevated tees, and finely manicured bent-grass greens. He certainly enjoyed himself. —Last but not least we like to applaud The Inn’s managing team and the baker who creates the Black Forest Cake, easily the best we both have ever had and that includes all the tortes we tried in Germany and Austria! The Asams’ sons Christian and David who manage The Bavarian Inn also created the newest edition to their European Inspired Boutique Resort, the Bavarian Brothers Brewery where one may “Sample seasonal beers made on site matched with intelligent, yet comfortable cuisine and small bites by Executive Chef Jeffrey Ault. Relax and enjoy our brews in the Brew Pub, Brew Lounge or outdoor Beer Garden.”
www.bavarianinnwv.com

On the way out of town we stopped once again in the village, this time at the local bakery and bought some of the German bread that is served with dinner at the Inn. Once back home we wish we would have bought more! Until next month from another interesting location. 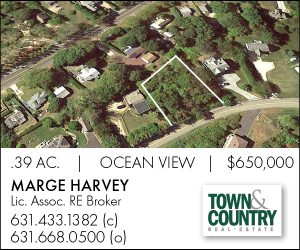