Israel was on my bucket list since the days I got hooked on travel in my late thirties, but it would take me twenty five years until I was finally allowed to step foot on these holy grounds. My husband and I were part of a Holland America cruise that took us all over the Mediterranean, from Morocco to Israel and many places in between. We had booked three days of excursions of Jerusalem, Nazareth, the Jordan River, Sea of Galilee, Mount of Beatitudes, and Capernaum, the old walled city of Jerusalem including the Christian, Jewish, and Armenian quarters, Mount Zion, Garden of Gethsemane, King David’s Citadel, Via Dolorosa, Church of the Holy Sepulcher, Roman Cardo, King David’s tomb, Wailing Wall / Western Wall, Temple Mount and Bethlehem, Tel-Aviv and we both were very excited. The weather was beautiful and the guards at the cruise terminal welcomed us with gracious smiles. 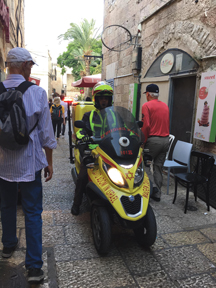 Israel is a country in the Middle East, located at the eastern end of the Mediterranean Sea. It is bounded to the north by Lebanon, to the northeast by Syria, to the east and southeast by Jordan, to the southwest by Egypt, and to the west by the Mediterranean Sea. Israel is a small country with a relatively diverse topography, consisting of a lengthy coastal plain, highlands in the north and central regions, and the Negev desert in the south. For a country the size of New Jersey, Israel’s natural diversity is immense and gives way to countless sites of wonder. The State of Israel is the only Jewish nation in modern times, but the region that now falls within its borders has a lengthy and rich history dating back to pre-biblical times.

Israel contains sites sacred to Judaism, Samaritanism, Christianity, Islam, Druze and the Baha’i faith. We witnessed pilgrims worshipping here from all over the world, and of all denominations. About 43% of the world’s Jews live in Israel today, the largest Jewish community in the world.

Since tourism has increased in Israel significantly over the years, we have to talk about food. Modern Israeli cuisine represents a culinary fusion of traditional Jewish foods and foods brought to Israel by Jewish diaspora. Due to the geographical position of Israel, the cuisine of Israel belongs to Middle Eastern cuisine and Mediterranean cuisine strongly influenced by Asia, Africa, and Europe. Thanks to various cultural and culinary influences, and a highly conducive microclimate, Israeli foods represent some of the most delicious and healthy foods in the world. We ate Israel’s traditional foods where and whenever we could and loved especially the variety on their buffets. Nevertheless, we also have to mention that today there are about 300 wineries in Israel in 5 main wine regions: Galilee, Judean Hills, Negev, Samson, and Shomron.

We tried Falafel, an inevitably traditional Israeli food that is quite common throughout the Middle East. In Israeli cuisine, falafel takes a special place as it is considered to be a national dish and also the ultimate street food in Israel that you can find on every corner. Falafel balls are made of deep-fried chickpeas, fava beans or both.

We tried another typical Israeli dish made of poached eggs in the sauce of tomatoes, chili peppers, and onions spiced with cumin or zaatar, paprika, cayenne pepper, and coriander. Shakshouka is one of the most loved dishes of Israeli cuisine and we fell in love with it as well. This egg dish is typically eaten for breakfast, but we enjoyed it immensely for lunch.

One of my favorites was Tabbouleh, a simple delicious classic Middle Eastern salad originating from neighboring Lebanon, confirming that beauty lies in simplicity. Israeli Tabouli is a salad prepared of finely chopped vegetables, parsley, bulgur wheat, spiced with olive oil and lemon juice.

For dessert we tasted New York City’s new superfood, dates! Israel is the largest exporter of dates in the world and while traveling Israel we saw large plantations of dates, especially in the border area between Israel and Jordan.

We found juice stands on every corner during our walking tours. Jaffa oranges originate from the city of Jaffa, which is the oldest part of Tel Aviv. Therefore, Tel Aviv is nicknamed ‘Big Orange’. Jaffa oranges refer to sweet, seedless and oval-shaped oranges developed by Palestinian farmers in the 19th century.
And then there are pomegranates! Vendors hand-pressed pomegranate halves right in front of your eyes before you start indulging in this invigorating, inexpensive pick me upper!

Another way to get an instant kick is sipping Arabic coffee prepared in traditional Arabic copper coffee pot with cardamom, saffron, and rose water. Arabic coffee in Israel is usually served in a small delicate cup with some sweets on the side. Israel is the only country in the world where Starbucks failed because locals love their coffee and their way of preparing it so very much. Good for them. I went for a cup of fresh mint tea instead. When you put a few fresh mint leaves into hot water, you get a highly aromatic tea widely sipped in all the Middle East and Africa region. If you are traveling to Israel, please consider taking a cuisine tour as well when you have the time. We had unfortunately only three days but will treasure every bite, moment and prayer. www.GuidedToursIsrael.com 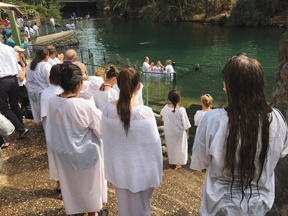 Besides for the food, visitors are drawn to Israel’s numerous religious, archeological, and historic sites—such as the Western Wall and the Dome of the Rock, the biblical cities such as Nazareth, and Bethlehem in the West Bank—as well as to its geographic diversity, excellent weather for leisure activities, and links to the Jewish and Palestinian Arab diasporas. There are numerous resorts in the highlands and desert and along the coast, with most tourists coming from Europe and a growing number from North America. A passionate young Israeli woman was our guide for all three days, but I should mention that a Palestinian guide conducted our tour into Bethlehem, as it is under Palestinian jurisdiction and that we were given a mandatory stop for shopping as part of the itinerary in Bethlehem. 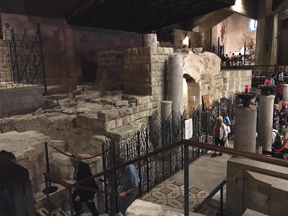 One of our favorite experiences was to the rugged mountainous region of Northern Israel. Galilee, home to stunning wildlife and beautiful scenery is also an area of great interest for pilgrims, who come here to discover the important biblical sites that surround the area. Nazareth, according to the Gospels was the childhood home of Jesus and where his mother Mary lived. We visited the church of St Joseph which houses the Basilica of the Annunciation, an impressive site where the angel Gabriel informed Mary she would give birth to Jesus. Nazareth is the largest Arab city in Israel, with a distinct Middle Eastern flavor. Of course we visited the local markets located along the winding cobbled streets of the Old City as well.

The beautiful Sea of Galilee, Israel’s largest freshwater lake, is where Jesus spent much of his ministry and performed some of his best-known miracles. We also visited the Church of Multiplication, where Jesus fed five thousand people fish and bread. Not far from here we went to Capernaum, home to the apostles and Yardenit, a baptismal site on the Jordan River where we witnessed people at the very same spot still being baptized two thousand year later.