We were on the way to Berlin to experience the capital of Germany and its most famous hotel, the legendary ‘The Adlon Kempinski Berlin’ located on ‘Unter den Linden’ Strasse at the famous Brandenburg Gate, which is right next to the Adlon’s main entrance. The sight of The Adlon Kempinski Berlin was breathtaking and will give even the most sophisticated history traveler the chills. As the story goes, a wealthy wine merchant and restaurateur Mr. Lorenz Adlon was determined to build a fine hotel on the Pariser Platz at the Brandenburg Gate and asked German Emperor Kaiser Wilhelm II for help to intervene with the owners of the Palais Redern, a landmark designed by Karl Friedrich Schinkel, a Prussian architect and city planner. The Emperor, who was all for progress, cleared the way for Adlon’s purchase of the Palais, and its demolition. The newly branded Hotel Adlon, first opened on October 24th 1907 was soon regarded as one of the most beautiful hotels of the world and received praise for its architecture, artistic design and technical advances. It was one of the most famous hotels in Europe between the two World Wars offering unheard-of modern amenities to high paying guests and celebrities like Greta Garbo, Charlie Chaplin, Herbert Hoover, Josephine Baker, Marlene Dietrich, Thomas Mann, Enrico Caruso and numerous Heads of State – located only blocks from the Chancellery and other government ministries. The Adlon hotel continued to operate throughout World War II, although parts were converted to a military field hospital during the final days of the Battle for Berlin. Miraculously the hotel survived the war without any major damage until May 2nd, 1945 when a fire broke out in the wine cellar ignited by carousing Soviet soldiers, which left the main building in ruins. The President of the Federal Republic of Germany, Dr. Roman Herzog re-opened the Hotel Adlon in 1997. After more than 50 years, the Adlon was restored and inaugurated once again at its original location in Berlin’s most historic center. This hotel has had its ups and downs and has gone through different stages, but finally reached its full potential of a Seven Stars rating. 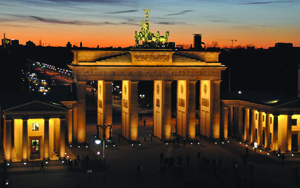 Entering the main lobby of The Adlon foyer on an early afternoon is a feeling that one must truly experience. The lobby is decorated with gold plated ceilings, French windows and a stained glass dome based on a painted ceiling design by Carl Friedrich Schinkel. Eloquence and comfort is sipping tea or enjoying a cool cocktail from the bar as history seems to repeat itself. High Tea is a highly respected ceremony at The Adlon which one should try with some Petit Fours or a piece of these incredibly delicious torts with freshly whipped cream on the side. Guests who are checking in at the main counters are all offered a glass of champagne with a splash of the Adlon Rose Water, which is really unique and begins to set the mood. Besides, it is right out delicious and allows one to relax while listening to the splashing of the elephant fountain or the hidden piano music player from the Bel Etage above. The Adlon was buzzing; ‘The Grand Dame’ is the place to be. We were guided to one of the three elevators and then up to a stunning presidential suite. In addition to the three presidential suites the Adlon features close to four hundred rooms and suites, several banquet and ballrooms and restaurants. The hardware in the suites as well as the rooms that we got to see were impeccable, part of the walls and doors were covered in mahogany and the classy furnishings were made of mahogany or cherry wood and eloquently decorated. One of the interesting technical highlights is the electronic key card system, which simultaneously turns on the lights and air-conditioning as it opens the door. The Adlon is famous for its “Welcome” chocolate and sugar art, which is not just delicious but also most creative and delightful to look upon. 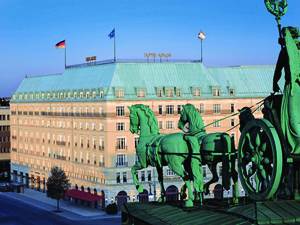 Since many of the attractive historic sites are within walking distance from The Adlon, you may enjoy a self-guided sightseeing tour equipped with a camera as there are plenty of elegant shops, boutiques and jewelry stores that you may pass on the way. After a day of sightseeing, a visit at the Adlon Spa seems almost essential either for a relaxing massage or a manicure or chic Aveda hairstyle for an elegant dinner at the Lorenz Adlon Esszimmer. The Adlon Spa was clearly designed with the five elements of Chinese medicine in mind: wood, fire, earth, metal and water, which are the basics for well being and inspire a person’s emotional response and promote tranquility and relaxation. Every Sunday the Restaurant Quarré serves a sumptuous feast of amazing foods with unparalleled views of the Brandenburg Gate. The Sunday Champagne Brunch at The Adlon is worth an event, a celebration for the palate, presented and served with expert skills and gracious smiles and a never-ending stream of Moët & Chandon. This most opulent display of traditional and regional gourmet cuisine, including fresh stone oysters and lobsters and the most creative desserts will not only entice any palate, but it is the perfect setting for a special celebration. Reservations are strongly encouraged. By the way, much of the Liam Neeson psychological thriller ‘Unknown’ was filmed at the Adlon and kept Mr. Eller and his team in action for quite a while. There is a pride felt at The Adlon that seems to be ingrained in every single employee that we came in contact with. Berlin ist eine Reise wert! 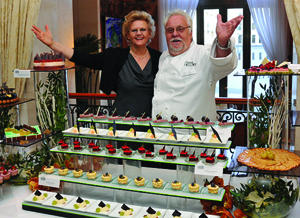 – Until next month from another exciting location — Love, Ingrid