Amyotrophic Lateral Sclerosis, ALS, has been on the fore‐ front over the past few years. As awareness grows, unbelievable stories of this brutal and seemingly unrelenting illness, have swept the globe. Even more terrifying than the idea of losing loved ones to this sickness is the fact that we have little to no idea what causes ALS or what we could do to prevent or cure it. Among the many ALS awareness and research fundraising organizations, there is an extraordinary story which we have the privilege of experiencing ourselves. 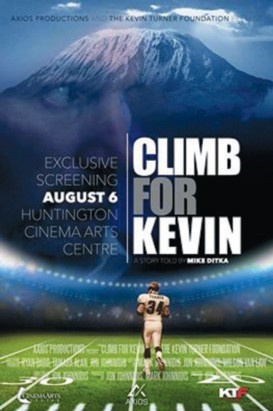 Climb for Kevin is a documentary film narrated by Hall of Fame NFL coach Mike Ditka. The film tells the story of The Kevin Turner Foundations’ Kilimanjaro Project. Turner is a former fullback for the New England Patriots and the Philadelphia Eagles who was diagnosed with ALS in 2010. After Turner was diagnosed with ALS, he created the Kevin Turner Foundation to bring attention to the disease, raise awareness about the seriousness of brain trauma in athletes and its possible connection to ALS, and to support financial efforts to treat, prevent and cure the disease. The film is a chronicling of the former Alabama and NFL great, Kevin Turner’s struggle with ALS and what happens when a team of people choose to honor him by climbing the tallest mountain in Africa, Mt. Kilimanjaro. The story is powerful.

The Climb for Kevin movement has raised over $80,000 for ALS and concussion research. This film is the story of that remarkable accomplishment. Mellish, a Montauk Music Festival favorite, is an important part the film’s sound‐ track. On August 6th when the film premieres, the band will play an acoustic set after the showing. That screening is at the Cinema Arts Centre in Huntington NY. In a statement from Mellish, the band shared how honored they were to be a part of the cause. “Kevin is a remarkable human being and it’s hard to watch the film and not leave inspired. We encourage everyone to come down, watch the film and enjoy some acoustic numbers to support the Kevin Turner Foundation” (Mellish).

So, join film producer and director Jon Johnnidis as he brings his work to his home‐ town, Huntington. Johnnidis also accompanied seven others who climbed Mount Kili‐ manjaro for the Kevin Turner Foundation.

When: Thursday, August 6th 6:30 pm film with an after party directly after.
Where: Cinema Arts Center of Huntington‐ cinemartscentre.org
How to buy tickets:
https://event.attendstar.com/event/show/climb‐for‐kevin‐huntington‐ny‐screening/
kevinturnerfoundation.org
How to listen to Mellish: http://avec‐mellish.blogspot.com/