Every household that celebrates Christmas has its own family traditions. Whether it is the meals they prepare, cookies they bake, decorations on the tree or the religious aspects handed down through the generations, these personalize the holiday. Many families take turns hosting Christmas and that can also be part of the tradition, as described in the holiday song about being off to grandmother’s house we go. Meanwhile there are many aspects of the holiday we continue to follow, yet might not be too sure of their early origins. So here is some trivia about Christmas. 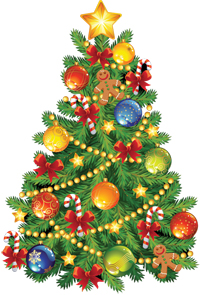 The Tree: Way back over 400 years ago evergreens were a part of Christian Christmas celebrations in Germany and then spread throughout Europe. During the American Revolutionary War Hessian mercenaries brought the custom to the United States. However it is Austrian Prince Albert, married to Queen Victoria of England that is given the credit for introducing the decorated Christmas tree to the royal court in 1840. After being illustrated in the local magazines and newspapers at the time, having a tree became the rage for the upper class to copy this holiday décor. At first table top trees were the appropriate size for the home, but later grew into the floor to ceiling heights we know today. Early pioneer homes in America made their own tree decorations as “store bought” had not been known at the time. Children would string pop corn or berries into roping and use pine cones and other natural materials to adorn the tree. Gifts found under the tree were also much simpler, usually a new pair of mittens, socks and scarf all knitted by their mother and truly appreciated. Perhaps if times were good, an orange, some nuts or a lollipop might be added to their stocking.

Now in more modern times we think of the magnificent tree that is a symbol in Washington, D.C. Having a tree in The White House was started by Franklin Pierce, the 14th president in 1923. It was Calvin Coolidge that started the National Christmas Tree Lighting Ceremony now held every year on the White House Lawn.

Mistletoe: What fun to be caught under the mistletoe and receive a kiss from your loved one! Who started this playful tradition? It is part of Scandanavian mythology, relating to Frigga, the Norse goddess of love. As it was considered “a pagan ritual” churches began to forbid its use and instead replaced it with holly to be used as a home decoration and in churches. Symbolism for the holly was that the very sharp, pointy leaves were supposed to represent the crown Christ wore on his head and the red berries were to symbolize his blood.

Xmas: How did the word Xmas become the shortened version of Christmas? The first letter of the Greek word for Christ, Xristos, starts with the letter “X”. “Therefore “Xmas” means “Christ’s Mass” and this spelling has been around since the sixteenth century. It is not, as some people claim an attempt to take the “Christ” out of Christmas and make it a secular holiday.

Candy Canes: This is a really sweet story, pun intended, on how candy canes came to be. Yet another tradition that originated in Germany, this one started about 250 years ago as straight white sugar sticks. Then around 1670 there is a legend that a choirmaster, looking for something to keep young children quiet during the long Christmas service, gave them something to eat. Wanting to keep with the theme of Christmas he told them it was shaped like a “J” to look like the shepherd’s staff, to remind them that shepherds visited baby Jesus at the first Christmas. Sometime around 1900 the red stripes were added and they were flavored with peppermint or wintergreen. Christian readings have explains that the “J”’ can also mean Jesus and that the white of the cane can represent the purity of Jesus and the red stripes are for the blood he shed when he died on the cross.

There are scores of other fascinating tidbits about Christmas that each hold a wonderful story of how it began. However, the only story that is most important to each of us as we celebrate this beautiful holiday is to be able to share it with family and friends that are dear to us. Wishing all our Montauk Sun readers a very Merry Christmas, Happy Holidays and Wonderful New Year ahead!