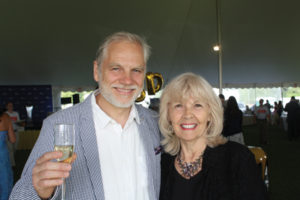 Another successful James Beard Foundation (JBF) event was held on the stunning grounds of the Wolffer Estate Vineyard in Sagaponack. Well attended with an extraordinary turnout of more than 1,000 guests this year, it was an event not to be missed! Marcus Samuelsson, this year’s honoree, multiple James Beard Foundation Award–winning chef, author, and restaurateur was thrilled at the turn out for the celebration of his achievements. This event is about food and fine dining and more than 35 chefs helped fête Samuelsson at this sumptuous 27th annual fundraiser. The Foundation’s tasting party featured flowing Champagne Barons de Rothschild, wines and ciders from Wölffer Estate Vineyard to compliment the delicious tastings. On hand greeting and mingling with guests at the host venue was the warm and personable Roman Roth, Winemaker and Wolffer partner.

“This year’s summer fundraiser honoring Marcus Samuelsson was one of our most successful ever,” said Susan Ungaro, president of the James Beard Foundation. “Marcus is a role model for chefs, restaurateurs and culinary entrepreneurs worldwide. His extraordinary talent, philanthropic endeavors, and boundless energy to help others complements our mission to celebrate, nurture, and honor chefs and other leaders making America’s food culture, more delicious, diverse, and sustainable for everyone.” Chefs & Champagne’s guest of honor, Marcus Samuelsson, joined the ranks of gastronomic giants such as Bobby Flay, Thomas Keller, Emeril Lagasse, Wolfgang Puck, and Martha Stewart, who have all been fêted at prior events. Samuelsson is the acclaimed chef behind Red Rooster Harlem, Ginny’s Supper Club, and Streetbird Rotisserie. A committed philanthropist and the youngest person to ever receive a three-star review from The New York Times, he has won multiple James Beard Foundation Awards including Best Chef: New York City. He was also crowned champion of television shows “Top Chef Masters” and “Chopped All Stars,” and served as a mentor on ABC’s “The Taste.” He is the author of five books and owns restaurants in New York, Washington, D. C. and London.

When appearing on stage with Ms. Ungaro, Chef Marcus Samuelsson greeted the audience with enthusiasm, and a genuine appreciation for the honor and praise that was just bestowed upon him. His cheerful personality and warmth was evident as he acknowledged and thanked the chefs that came out to prepare the tastings for the guests. He complimented them for the hard work it is to travel out to the east end, set up their cooking stations and be able to present the most delicate and inspiring offerings to the appreciative crowd. Many of the chefs attending the event come from New York City, around the U.S., Caribbean islands and this year there were chefs from a noted cruise line. After the presentations, Samuelsson was affable and approachable when guests came over to congratulate or ask for a photo with him. In the many years we have been attending these events, I’d easily say Marcus Samuelsson was the most outgoing, engaging and gracious recipient. Carrying on its long tradition of supporting culinary education, the James Beard Foundation was proud to announce Jordan Werner as the recipient of the 2017 Christian Wölffer Scholarship and the ICC Intensive Sommelier Course tuition waiver. Established in 2006, the Christian Wölffer Scholarship assists students in their study of food and wine. Also in attendance was multiple Christian Wölffer Scholarship recipient Christina Cassel and JBF National Scholars recipient Earlene Cruz.