While Montauk residents are still researching the prospect of building wind turbines at sea, their Block Island neighbor officially went off the grid on May 1, getting all its electricity from five huge wind turbines located about three miles off their Southeast Lighthouse, in the ocean waters. The Block Island Wind Farm is the first offshore wind farm in the country. 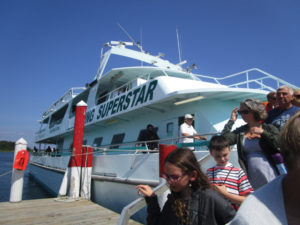 Sailing over to Block Island this August aboard the Viking Superstar, passengers could see these 600-foot steel wind turbines glistening in the sun. Each turbine has three blades, each measuring 240-feet long, or about the size of a football field! Depending on the wind speed, they turn fast, of barely turn at all.

The Viking Starship is an easy way to get to Block Island, being 120 feet of solid steel, and getting there is about an hour and 15 minutes, from Montauk Harbor. You can sit on the lower or upper deck, you can bring your bike or dog, and there is even a galley with breakfast or lunch, drinks, and coffee. Steering the ship was Captain Jay Burke, a Montauk native, on the ride over, and Captain Paul Forsberg, founder and owner of the Viking Fleet, on the way back. 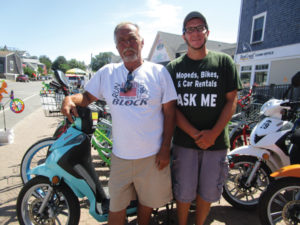 Sailing into the New Harbor, we passed numerous sailboats, and yachts docked at Champlin’s Marina. We picked up our PT Cruiser at nearby Aldo’s Car and Bike Rentals in the boat basin, where owners Leo Leoni, Sr. and Leo Leoni, Jr. have this family business, along with their Aldo’s Car and Moped Rental business in the heart of town, next to Aldo’s Italian Restaurant, Bakery and Ice Cream shop. Their grandfather, Aldo, came to Block Island from Italy and started the family business, which is an institution on the island. 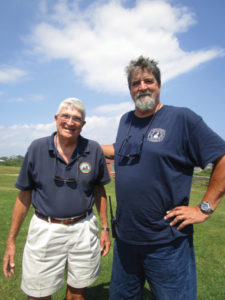 We headed over to the Oar Restaurant to meet Bryan Wilson, who lives on the island and manages the Block Island Wind Farm. He works for Deepwater Wind, which developed the wind farm on this island, and is also looking into creating one 30 miles off Montauk, to power the Township of East Hampton.
Wilson explained that in 2007, the State of Rhode Island started looking into wind energy for the Town of New Shoreham, or Block Island, with its wide open wind resources. With its year-round population of 1,000 people, that soars to 20,000 during the summer months, islanders and tourists would sometimes experience brownouts, outages, and internet problems.

“We needed additional infrastructure and generation capacity to handle the influx of tourism for three months a year,” he said. “Also, Block Island was importing diesel fuel by tractor trailer trucks on a ferry, and burning a million gallons a year. It was very expensive, and was a dirty way to produce power. It was also risky, in case of potential fuel spills in this pristine area.”

Wilson said with the new wind farm, Block Island residents were also able to lower their electric bills by 40 percent, “from historical highs of 65 cents per kilowatt hour.”

Kathy Szabo, Executive Director of the Block Island Chamber of Commerce, said later that, “Our power rates were the highest in the country, with everything being shipped in.”

Bryan Wilson said an added benefit to the residents is that they now have access to fiber optics for better internet service, which also benefits the fire, rescue, medical center, school, police, and town hall, and also the tourists.

Bill McKernan, a longtime summer resident of Montauk, who moved 10 years ago to Block Island, is Chairman of their Broadband Committee to bring high-speed internet service to the island.
“With this new wind farm, we are now connected to the mainland by a 30-mile cable with fiber-optics, to enable us to have the internet service we need,” he said. This cable is buried deep beneath the sea.
Wilson said yet another benefit is that only 10 percent of the wind energy created by the five turbines is used to power Block Island. The other 90 percent of the energy goes back in the mainland Rhode Island grid. The wind farm supplies enough energy to power 17,000 homes. He added that another benefit was the creation of over 300 new jobs.

“The beauty of offshore wind is that you have very clean air, or wind flow, and lots of it,” Wilson explained. “In the Northeast Corridor, we have world-class wind resources.” He said since one-third of all the electricity in the United States is utilized from Boston to New York City, Deepwater Wind is looking into providing energy to LI and later Massachusetts to meet that demand with offshore wind energy. Although it took 10 years to research and get the permits in place for the Block Island project, perhaps it will be a model for these other areas, to speed up the process.

We decided to see these wind turbines for ourselves, so my friend and I hopped aboard the High-Speed Block Island Ferry, run by Interstate Navigation out of Galilee, Rhode Island. They take about 100 passengers each day around 4 pm, on an hour tour out about 3 miles to get up close to the 5 wind turbines, which are each a half mile apart.

“I’m proud that we’re the first town in the country to go off the grid with an offshore wind farm,” said Cindy Lasser, who narrates the boat tour. “I want to stick with it and see how it works. It’s so much fun to see the delight on the faces of the people who take my tours.”

The wind whipped in our faces as we proceeded out to the turbines. Since the still air was not moving too much, when we slowed down, neither were the blades on the wind turbines, but they were still great to photograph. We met people on the boat from all over the country, who had come here to see for themselves.

Emma Dowd, 18, of West Hartford, Connecticut, was here on a family excursion. “We’ve all been coming to Block Island for a long time, and we’ve been hearing about this wind farm, and now we’re excited to see it,” she said.  Leah Brams, 19, an environmental science major at Dartmouth University, said she thinks the turbines “are a great idea.”  I think it’s cool to see a community like this give back to the planet,” she said. “I have friends on the Cape and they’re still looking into it.”  Carole Galli, of Hilton Head Island, said, “This is fabulous, and I believe in it. This small island is taking the first big step, and it is to be commended.” 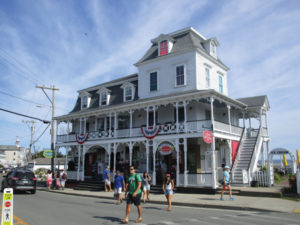 After the boat tour, on this perfect sunny day, we checked into the charming Old Harbor Inn, located at 231 Water Sreet, and overlooking the scenic harbor, ferries, and restaurants. If any inn exemplifies the romantic Victorian era, this is it, with its three-story, gingerbread architecture, old-fashioned porches and waterfront balconies, and lovely print wallpaper throughout. It is owned and operated by our friends Gabrielle and Kai Costanza, who are brother and sister, and live in Montauk. They also own two Kai Kai Sandals stores in Montauk, one in Key West, and one in the Inn at Old Harbor. We loved our stay at the Inn, which also offers morning breakfast and afternoon wine and cheese in their “common room.” Visit www.innatoldharbor.com

With so many connections to Montauk, this is the next place that Deepwater Wind is looking at building another wind farm, called the South Fork Wind Farm. With so much new growth on the South Fork, LIPA has concluded that there’s only a finite amount of power that can flow, and that something needs to be done by 2022. Of all the types of projects available, the wind turbines would be the most cost effective.

The South Fork Wind Farm would consist of 16 wind turbines and supply power to 50,000 homes in the Town of East Hampton. Deepwater Wind is still in the research and talking stage, with local residents, who have been attending informational meetings. Former East Hampton Town Councilwoman Julia Prince, of Montauk, is a liaison between Deepwater Wind and the local people, especially the fishermen, who have concerns about possible impacts on the marine environment. Unlike Block Island, which has mostly recreational fishermen, Montauk is a large-scale commercial and charter fishing capital.
“I have been meeting with Montauk’s commercial and recreational fishermen on a one-to one basis since May, and also going around the docks to talk with them,” she said. The fishermen have concerns about the proposed location of the turbines around Cox’s Ledge, a major fishing ground, and also the construction of the turbines, so they don’t adversely impact the ocean floor, the fish, and habitat. Also, after dealing with so many state and federal fishing regulations over the years, they are afraid of more regulations.

But Clint Plummer, Vice-President of Development for Deepwater Wind, said after doing extensive surveys and environmental impact statements, there was no adverse impact the on fish stocks in Block Island, and that his company would build the turbines in a responsible way. He said after getting feedback from the Montauk fishermen and Town Trustees about the location of the cable, which was to be brought in on the bay side, his company is now looking into bringing it in on the ocean side instead.
“We intend to listen to the fishermen and the community, and we are still in the public process, collecting data,” he said.

Bryan Wilson said the Block Island turbines have created an artificial reef where more fish have gathered, which has been good for their recreational fishermen.

Plummer said this wind farm is in the preliminary stages, and the final details still need to be ironed out.
“We need federal, state and local permits, and we expect it will take another two years until they get approved,” he said. “I wouldn’t expect the fishing community to support us yet. But we respect them and want to listen to them, so we hope it is the same for them.”

East Hampton Town Supervisor Larry Cantwell said he supports renewable energy and he thinks the South Fork Wind Farm could help meet the needs of his town, “But we still have a long way to go, and lots of information to share.”

While the initial project at Block Island appears to be a win win, there are many concerns for the effects on marine life and the fishing industry. We will surely be reporting on this in the future.