With schools starting again this month, some of us may think back to the days we were students and getting reading for another school year ahead. Take a mental trip back to your elementary school days when you were studying American history. Besides the obvious Presidential studies, what other statesman comes to mind for the most accomplishments? From my school days, it seemed to be Benjamin Franklin who was known of course known as a founding father, but also as a prolific inventor, printer, journalist and author.  His Poor Richard’s Almanack (colonial spelling) was published under a pseudonym, Richard Saunders and was published annually for 26 years. During colonial America it was known as a best seller and over 10,000 issues were sold each edition. Franklin’s Almanack included various tidbits, a variety of topics such as puzzles, poems, historical facts, household hints and whatever Franklin thought his readers would enjoy. Probably the most famous inclusions were his proverbs, or “maxims” that live on to this day and are concise, witty and thought provoking. Many of these expressions we know by heart, yet people might not realize there were hundreds of them created by the amazing Benjamin Franklin.

Favorites: I’m sure everybody has their own expressions that they either use or can feel the wording was spot on for its accuracy and “pithy” observations. We all know that “a penny saved is a penny earned”, or “haste makes waste” and the old standby “Early to bed, early to rise, makes a man healthy, wealthy and wise.” But in 26 years of publishing the Almanac there are many more, lesser known ones worth reading. Here are a few that are to the point and clearly show the intellect and observations of Franklin of his fellow mankind.

1. Whate’er’s begun in anger ends in shame.
2. A quarrelsome Man has no good neighbors.
3. Well done is better than well said
4. He that sows thorns, should not go barefoot
5. Silence is not always a sign of wisdom, but babbling is ever a mark of folly

Delicacies: Since Franklin was an Ambassador to France, he had the opportunity to travel to Europe and taste foods we did not have in America yet. The story goes that during the time he was in France from 1778 to 1785 he had a chance to be wined and dined during his political obligations there and learned about new cuisines. He was credited with bringing back and introducing the colonies to Scotch kale, Chinese Rhubarb and kohlrabi and Swiss barley. Besides being healthy to eat, these items enhanced a mundane diet that colonists were used to having. 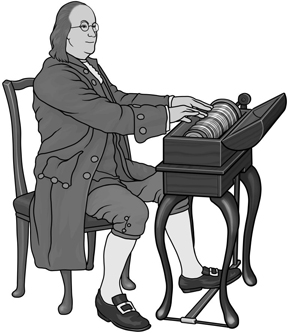 Inventions: Going back to what we learned in elementary school, who has not seen a textbook with an illustration showing Franklin with his famous kite standing out in a thunderstorm waiting for that thunderbolt to strike?  Thereby he discovered that electricity existed in these storm clouds in the form of lightning. Besides the lightning rod there is a whole list of inventions that most of us don’t realize are part of his legacy, too. No wonder there is a whole museum dedicated to Ben Franklin in Independence National Historical Park in Philadelphia.  Did you know that besides the Franklin Stove and bifocals he invented swim fins, a flexible catheter, and the long arm to remove books from a high shelf? He also created the glass armonica, a musical instrument made of spinning glass. Just a few months ago the photo of this odd-looking instrument was a visual question on the game show, Jeopardy, and no contestant knew the answer when looking at this unusual looking instrument.  But probably best of all of Franklin’s ideas and inventions was his founding of America’s first circulating library, first liberal arts academy, which is now the University of Pennsylvania, the first public hospital and the first mutual insurance company.   Can there be any other person from our colonial roots that has invented so much for our country that we still use today? Maybe not, but surely this puts Ben Franklin in high esteem by any measure, I think.