U.S. Coast Guard Station Montauk is located Star Island, on the easternmost end of Long Island in Montauk, New York. Station Montauk was officially opened on October 1, 1955 and has remained an active Search and Rescue and Law Enforcement unit. 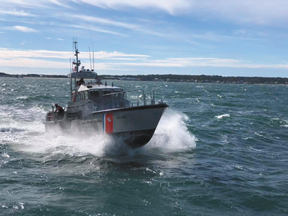 Master Chief Eric Best, who is winding down his four year term and currently awaiting his new assignment, told us that in addition to the new cutter, last year they were designated as the only Heavy Weather Station on LI. This

designation allows them to respond in conditions up to 20ft. whereas the others respond up to 10ft. To maintain the new status, they now have a 3rd 47 foot Motor Life Boat [MLB] which is a self-righting boat. In addition they have three additional personal assigned to the station for boat maintenance and for responding to search and rescue.

Next summer will bring a change of command to the Montauk station. After four years of service, Master Chief Eric Best and first class Petty Officer Ryan O’Hare will be reassigned. We thank them for their service to the Montauk community, and wish them luck at their new posts.