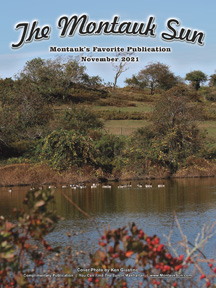 Aside from the availability of riding beautiful horses through thousands of scenic acres of Suffolk County Parkland in Montauk, the ranch is full of nature’s beauty. The cover photo is of the lake behind the stable. The view changes daily with roaming deer and fox, a variety of water fowl- including geese, ducks, swans, great blue herring, and even an occasional Bald Eagle perched in a tree or doing fly-over.

Established 1658, the Deep Hollow Ranch is the oldest working Cattle Ranch in the United States, and is part of the Suffolk County Parks. Concessionaires, Patrick and Cate Keogh, have been running the ranch since they took it over in 2010. Cate, the caretaker, who is born and raised in Montauk, handles the day-to-day operations as well as being a trail guide when needed. She and Pat have a long history with the operations of the ranch. They worked the ranch with previous keepers for about thirty years, left for a bit to establish other livelihoods, but always had ties to the ranch with their own horses, and lending a helping hand when requested. Now their children Francesca, Broudy and Rohan, can also be seen around the ranch guiding groups, helping riders on and off, and even with feeding, care, and maintenance of the horses and ranch.

The history of Montauk and the ranch date back to the Montauket Indians. Known as the oldest working cattle ranch in the US- Deep Hollow Ranch has quite a history. The best I could decipher from East Hampton Town archives, articles about Montauk, and speaking with Cate, this is how it all came to be.

In 1648 the governors of the New Haven and Connecticut Colonies and their associates purchased from the Montauk Indians approximately 31,000 acres on Long Island’s South Fork. This group of investors in turn sold shares in their purchase to would-be settlers who originated from a number of different New England towns. The thirty-four original settlers obtained full title to the land in 1651 from the Connecticut governors and their associates. By this time the new town was known as East Hampton.

In 1655, a group of East Hampton men wanted to pasture cattle on Montauk. The Indian chief, Wyandanch, gave them the right of pasturage and an option to buy. In 1660, Chief Wyandanch’s widow and son sold most of the land to the East Hampton men for 100 English pounds.

The 1660 deed gave the Indians liberty to “sit down again upon ye land.” Which they did. They lived in Indian Field, north of what is now Deep Hollow Ranch, until after the 1879 sale to Arthur W. Benson, when they were “re-settled”- back to East Hampton.

The Deep Hollow Ranch was established in 1658 when all of Montauk was cattle and sheep grazing land, it was owned privately and leased out to livestock owners. They would drive the herds of cattle and sheep out for the summer months to grow fat on the Maritime grasses. That’s where First, Second, and Third House came in; they were the houses for the tenders of the heards. In the fall they drove them back and sold them at the market for more money because they had fattened up.

Then when the train came, they would load the cattle onto the train and local Dick White, John Lycke and some others would ride horses to meet the train. Along with the Dickenson brothers and some other Cowboys from the ranch, they would then drive the herds of cattle out and move them around in the pastors for the summer again.

In the 1920s the ranch became a guest ranch for people to come and stay. They built those nine beautiful cabins on the hill above the stables, as well as adding onto third house with other guestrooms and a wonderful restaurant. That ran until 1971 when the county bought third house and Deep Hollow as well as all the land down to the beach. They kept Deep Hollow as a concession to be open for the public to be able to ride and enjoy all the land. Third house became a museum which, unfortunately, is no longer open.

Through the years many Montauk locals have worked at the ranch, even driving the cattle to and from the trains including: Jimmy Hewitt, Pat Stanley, Betty Durea, Judy Schellinger, Connie Smith, Dan Huntring, Nancy Dickenson, Ann Dickenson, Bobby Borth, Dick White, John Lycke. and Shankie Dickinson.  Some like Henry Uihlein, and Marshall Prado enjoyed hangin’ out there around the pretty girls …rumor has it.

That quickly brings us to today, with a wonderful crew that are the youth of Montauk. Cate and Pat Keogh have passed on their love of the horses; riding, guiding, and working so hard to care for them. Some of the present staff are even involved in riding, reining, and cutting horses, which also is a part of Deep Hollow Ranch. Joe Cody of course was one of the founding sires for cutting horses, and Phineas Dickenson rode and trained him right out here at Deep Hollow!

The ranch is open year-round offering trail rides from age 6, and even pony rides around a corral for the little ones 5 and under. A popular ride is the trail to the beach, riders must be 8 and over for this one. It’s 90 minutes of walking and trotting through the beautiful parkland trails opening onto the beach at Oyster Pond for a ride along the shore, and then back through the trail to the ranch. Due to Covid 19, they’ve had to reduce the number of trail options, so the only other trail is the half hour ride through the parkland. This is a beautiful ‘walk only’ ride, kids starting at age 6 can ride as well. It’s perfect for families with young children, anyone who wants to give it a try, or just enjoy a shorter ride.

The trail guides are skilled riders eager to share the basics of riding a horse, as well as helping their guests savor the experience. Besides the fun of being on a beautiful horse, the surrounding panoramic view of the parkland makes for a perfect experience. With horses out in the corral, and others grazing on the hill above the stable next to third house, it doesn’t get much better. So, stop by to visit the horses, or call for a trail ride…you’ll love it.