A Montauk fixture for over 40 years, Kenny’s Tipperary Inn opened this season with a newly created menu for its restaurant and the addition of a Japanese Sushi Bar. Located in the heart of the harbor area, its prime location, at the intersection of Flamingo Avenue and West Lake Drive, makes it conveniently accessible from town or the dock area. Started by the Kenny family, starting with Charlie Kenny and his wife, Josephine, the family moved here in 1963 from the city. At first a bar was opened, then the restaurant and later on a hotel. Josephine still runs the hotel, which has been newly furbished this year adding Jacuzzis for two and king sized beds. The restaurant part is now under the management of her son, John and his wife Amy. John is one of twelve Kenny siblings and now his and Amy’s young son, working as a busboy, is the fourth generation of Kenny’s to work there! 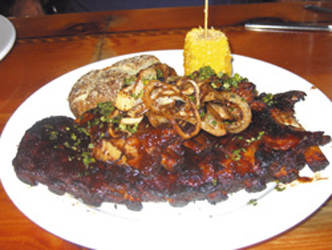 Revamping the menu was a priority and so guests will find something for everyone’s taste in the offerings. Executive Chef Maurizio Franco has devised what is described as American Fusion Cuisine, which is apparent when reading the appetizer and entrée choices. The restaurant boasts a “4 star cuisine in a traditional pub atmosphere”, so the food descriptions follow this thought. What is nice about these abundant selections is that Kenny’s Tipperary offers a place where the cuisine does not restrict your selection. The evening we ate there, several large groups came in that looked like two families together on vacation. I could see by the plates that passed us by, all three menus were being used to satisfy this multi-generational group. Everything from fantastic sushi creations, to special entrees and several “pub” items were brought to this table of twelve. We learned that Sushi Chef Miagi comes to Montauk after working in the Hunter Mountain area for over 27 years. What better place to offer fresh, delectable sushi than a stone’s throw from the Atlantic Ocean? Guests that have had the chance to sample Chef Miagi’s creations have used works like excellent and outstanding to describe their selections. A double sided menu lists all the sushi choices to pick from. The Sushi bar is open Wednesday through Sunday and take out is also available. Take out is great for guests or families with young children who are unable to eat out after a busy day at the beach. Children are welcome and for ages under ten there is a special price of $4.00 for dinner from the children’s menu.

Our server for the evening, Aine, had a warm smile, delightful Irish brogue and was helpful with some of the questions we had. Looking over the menu, we found our decision an easy one. For starters we had the Caprese Salad, fresh tomato and mozzarella, topped with salad. The tomatoes were tender and juicy and the thick, tasty slices of fresh mozzarella were hearty and plentiful. The other starter, Vietnamese Style Shrimp Curry was a knockout! Large, succulent shrimp in a fire roast coconut and red pepper sauce offered a “kick” with every bite. Dragon sauce and sour cream dip accompanied this mouth watering wonder. This starter will soon be added to the menu as an entrée and I can heartily recommend it! Other starter choices include their award winning chowder, soups, polenta encrusted calamari and cob salad.

Entrée specials include filet mignon, grilled Mako steaks, striped bass, three pasta dishes and a shrimp and chicken scampi combination. My husband’s choice of poppy seed crusted seared tuna, served with cannelloni and clam ragu and sweet and sour onions, was cooked to perfection and each bite was tender and flavorful. Hickory smoked BBQ ribs with salt encrusted baked potato and corn on the cob caught my eye. What appeared before me was the largest rack of ribs I have ever seen on a rib entree! It has been a while since I ordered ribs and this aromatic plate was worth the wait. The taste was out of this world with bits of tender meat in a delicate sauce, perhaps infused with a honey coating. With this entrée you have to come hungry because of the portion size you are given! Entrée choices can also be ordered from the Daily Menu which includes fish dishes, steak, pasta, burgers, sandwiches, finger foods, salads and more. Desserts offered were a modest selection of either a Brownie Sundae, which was a three tiered layered delight, or a coconut rice pudding, surrounded by fresh blueberries. A children’s menu is also available. An extensive wine and beer list is available to select from to go with your dinner choices. There is also plenty of space to accommodate large parties or special events.

Kenny’s Tipperary also has an active night life with live entertainment on Wednesdays through Sundays. This includes Dueling Pianos, The Mickey Finns, Lads from Ireland and NYC, playing their Celtic Rock, Irish Night and DJ’s playing music to dance by. Check Kenny Tipperary’s website for information on weekly entertainment.
Kenny’s Tipperary Inn is open seven days a week. Dinner service begins at 5 pm and the last seating for dinner is at 10:30 pm. A late night menu is available after those hours for guests coming in for drinks and/or the late night entertainment. To view other menu selections read the Montauk Sun or visit their website at www.kennystipperaryinn.net The telephone number is 631 668-2010. Come and stop by and have dinner at Kenny’s Tipperary Inn. If you haven’t been there in a while, you are in for a pleasant surprise! Happy dining!