On February 19, I received an e-mail from Pastor Bill Hoffmann of the Montauk Community Church stating in part: “…Sunday, February 21 is Dick White’s 80th birthday. Dick is a lifelong member of MCC and a leader in the wider Montauk community. His family is planning a SURPRISE birthday drive-by caravan at 2:00pm Sunday for any who would like to wish him well on his special day.” 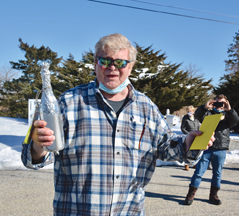 Sunday came and more than 50 cars some with banners, gathered at the firehouse. With sirens blazing, lights flashing, bells ringing from fire trucks and SUV’s honking, led by Chief Mitchell Valcich, my husband, our black Lab Princess and I happily followed the caravan to drive to Dick’s house nearby. Upon arrival, we found Dick and his family standing outside, waving to us, taking in alI the hoopla. There was a huge sign saying: Honk Your Horn For Dick’s 80th with pictures of him as a local boy. As our SUV approached his home, I opened my window and handed Dick a bottle of wine and threw him a birthday kiss. One could see that Dick was really surprised and overwhelmed with all the attention given to him.

Richard F. White Jr., aka Dick to his friends and colleagues, is a native of Montauk. He is so humble and down to earth that he’s probably not aware how much he means to the community. I first met Dick while working at the Montauk Point Lighthouse as a tour guide, nineteen years ago. Every time the Lighthouse Committee had a meeting, Dick who is the Chairman, always made a point to say hello. Dick’s charming personality and smile, always made me feel at ease. His wit and sense of humor is unsurpassed.

Whenever there’s a happening is town, Dick is there to volunteer his services. It’s no wonder that the Friends of Erin voted him their Grand Marshall in 1997 to lead Montauk’s St. Patrick’s Parade. He is also on the Board of the Suffolk County Parks Department. Dick is the Treasurer of the Montauk Fire Department, an EMT, driver and policeman. He is the man that announces the $50,000 and less winners at the yearly Fire Department’s Big Buck Bonanza picnic that helps fund the Christmas Dinner for 300 Montauk seniors. When asked in a previous interview what made him become a fireman, he said: “It’s in the blood. My father, Dick Sr. was one and my son, Dick III, is also one.”

Montauk is blessed to have Dick in our lives. In time of COVID-19, this reporter is glad that we were able to show our deep love and appreciation for him in person even for a short moment. “Thank you Dick for all you do for Montauk! May you have many, many more birthdays. We love you!”