John Rade’s whole family watched proudly as he was honored as “Fishing Legend of the Year” at the 2018 Mercury Grand Slam Charity Fishing Tournament on Sunday, July 15 at Uihein’s Marina in Montauk.

For over 40 of his 75 years, John has been out on the water starting at 3 am, in his boat, “Star Fish,” making his living by fishing. Most of this time he has been inshore fishing, supporting his family through his career, which he has loved.

He was presented with a plaque by both the Montauk Friends of Erin, and the East Hampton Kiwanis Club, which put on this charity fishing tournament each year.

“There are not many people left who are making their living solely by fishing, and he is one of them,” said Henry Uihlein, of the East Hampton Kiwanis Club, and owner of Uihlein’s Marina. In past years, the clubs have honored other fishermen, including Captains Bob Tuma, Ken Bouse, Paul Forsberg, Frank Tuma, Sr., Jake Nessel. and others.

Several friends, family members and colleagues talked about John at the event. His daughter, Judith, spoke of growing up with her father going out at all crazy hours of the morning, and of how she enjoyed going fishing with him and hearing about his adventures.

“It was a great life growing up in Montauk, eating fresh fish, and my father taught me a lot,” said Judith, whose mother, former Montauk Library Director Karen Rade, was in the audience as well.
Brian Smith, who has worked for 40 years at Uihlein’s Marina, and is also a member of the East Hampton Kiwanis Club, praised John for all his hard work and for his long career in the fishing business. Several of John’s long-time friends, from out of town, also spoke.

Throughout Saturday and Sunday, July 14 and 15, crowds of people gathered inside a big white tent near Uihlein’s Marina, to watch several species of fish being weighed for the 2018 Mercury Grand Slam Tournament. The idea of this annual fishing tournament is to catch one of each species of a seabass, a fluke, a bluefish and a striped bass. At this tournament, many of the striped bass were very large, weighing in at over 35 to 45 pounds.

The money raised at this charity tournament goes to various needs for families and children in the local community. This tourney has different divisions, including commercial boats, recreational boats, party boats, and also a children’s division.

Families gathered to watch their fish being weighed in throughout the day on Saturday and Sunday. This year’s event was lucky with perfect sunny weather….so it was well attended with about 150 people under the tent. Throughout the day, there was food available at Sammy’s Food Truck on premises, outside Sammy’s Restaurant. Each day, besides fishing, there was also great entertainment provided for kids and adults.

On Saturday night, at 7 pm, there was a special treat for the kids, with world-famous Illusionist Joe Garsetti. He also performed last year, and many loyal fans returned to see him again. He did all sorts of magic tricks– making a flock of real doves disappear, by doing tricks with cards and big gold rings, and also by making a table go up in the air. One of his best tricks, that also entertained the audience, was having Henry Uihlein, owner of Uihlein’s Marina, put his head on the block and pretend to cut through it with a saw. This was all an “illusion,” but it appeared very real, as Henry’s friends got a bit scared, but also got a big kick out of it. And Henry is still alive!

After Sunday’s fishing all day, and weighing in of more fish, there was a talented husband-wife duo, Rob and Patty Meade, singing and playing under the tent in their usual great style. Patty is Henry Uihlein’s niece, and they perform popular and oldies rock and roll tunes each year. All around the tent were hanging banners of the various business sponsors of the tournament. There were also great raffles prizes for all to win. Get ready for next year’s Grand Slam, where you could win some great prize money, and catch some fish, all for a good cause. 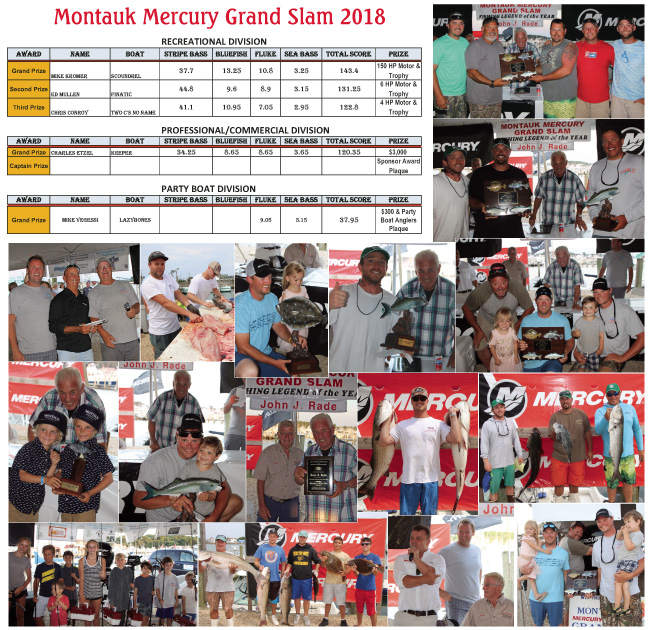