As much as Montauk has great local and from away music year round, sometimes one has to venture across the Stretch to East Hampton, even in summer. Tuesday, August 13th was such a night.  Amy Helm, daughter of Levon Helm, drummer/singer of The Band fame, performed first. “Gentling Me,” a Mary Gauthier song on Amy’s first album, “Didn’t It Rain,” spoke to me of deep romantic grief, but could be about any human suffering. I felt the surrender in each note and word, it was that beautiful.  “You passed right through me…I lost it all, that set me free. Only kindness can save us, only love can make it feel right…gentling me, gentling me…facing the truth down on my knees, they are gentling me.”  “Rescue Me,” is an up-tempo tune Helm delivered soulfully and melodically. Her joy on stage, which she was destined for is apparent and contagious. Singing, stroking a mandolin and songwriting is in her genes. Her mother is Libby Titus, a sixties and seventies rock pop singer who wrote the song “Love Has No Pride” made famous by Bonnie Raitt.

Amy is riveting to watch on stage; not only is she beautiful with her Botticelli curls and blue eyes, but in her long pink satiny summer dress and boots, she was downright sultry, having a grand time snapping her fingers and tapping her hip like a tambourine. It is her rich voice and ethereal range though that gets to you, her songs like sweet prayers for even non-believers. She makes you feel the music as the words cling to you and you recall them the next day singing them to yourself. With Helm, like her father before her, there is no choice, you will be moved and the music will stay with you. “This Too Shall Light” is another gorgeously raw song she performed and the title of her second album, of which I am now a proud owner. Her mandolin playing and the strap she proudly wears, a connection to her father, his name stitched on, “Lavon” Helm, the true spelling of his given name. “No one up north could pronounce it right.”

Woodstock is Helm’s country while folk, blues, country, gospel and Americana her home town. Helm’s former band Olabelle, is a tribute to Ola Belle Reed, a singer and clawhammer banjo player from 1930’s North Carolina who sang of Appalachian life.  GE Smith joined Helm for “The Stones I Throw,” a tune her father covered with his band, Levon and The Hawks in 1965. Helm played with her dad Levon in his blues band The Barn Burners and was a member of his Midnight Ramble in Woodstock, NY, where she was raised and still lives.

Tommy Emmanuel, to most guitar players needs no introduction. I found out why the other night.  Emmanuel burst out with “Train to Dusseldorf” and he was flying it. His fingers certainly were…I’ve never seen a guitar played like this in my life. I’d heard he was amazing, but the performance was out of this world. Emmanuel is a guitar genius. He doesn’t just play the guitar, the instrument becomes his one man band as he makes it come alive like no one I’ve ever seen before on a stage. He drummed out rhythms between the fastest picking I’ve ever witnessed, all the while tapping his feet and twirling the guitar around so quickly you might miss it if you blink. He is in control yet appears possessed as he fingers and taps and fills the room with music that will knock your socks off. He’s funny too. At one point the capo goes flying across the stage, he’s flicked it off in a frenzy of fretwork and gets right back to his picking and rhythmic tapping. Emmanuel is completely engaging and lovely, having a laugh with you and telling quick jokes as he incorporates it all into his guitar playing which is really more performance art and maybe wizardry at work. It’s fast, he’s into it, one with the music, the rhythms take over, you’re tapping your feet, swinging your leg, you want to jump up and dance you are so are infected with the sound and his presence. Who is this guy?! Why don’t I know him? I know him now. 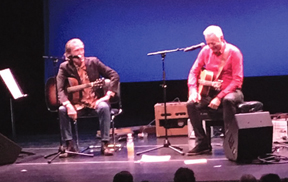 Emmanuel hails from Australia, where he began his guitar training or calling in his case, at the young age of six. His brothers and sister all played instruments and performed all over Australia as kids, their father driving the lot of them in a big van “until the money ran out.” Emmanuel learned the technique he uses, part chord stroking and part banging out the rhythms with his hands; he doesn’t have to think about it at all. It’s part of him.  He “practiced like crazy until I could just hear the music and my fingers did the rest.”  Emmanuel’s rendition of “Somewhere Over The Rainbow” was a moment of musical bliss. GE Smith agreed, as he joined in on guitar but then at one point stopped and just watched, obviously in awe of Emmanuel. GE is no slouch on the guitar as we all know, so this was huge. “This is a song about hope,” Emmanuel said of the classic song, “I think that’s why everyone loves it.”  I think everyone loves him. Emmanuel is as humble as he is talented, “The guitar takes over,” he said, “I hear the singer’s voice in my head. Like John Lennon when I play ‘Imagine.’ John himself is singing to me.”  Tommy Emmanuel was in the audience’s head Tuesday night, with more than one standing ovation, the guitar he commanded doing magical things. I felt privileged to be a witness.