The Hamptons International Film Festival (HIFF) announced their honorees and poster artist for their 27th Annual Festival that runs October 10 – 14, 2019. Legendary director Brian De Palma will be honored with a Lifetime Achievement Award as part of the 2019 festival along with a special screening to be announced closer to the date of one of his many award-winning films. De Palma will also participate in a “A Conversation With” at the festival with Festival co-chair Alec Baldwin. Brian De Palma is an American film director and screenwriter. Some of his notable directing credits include BLOW OUT, SCARFACE, THE UNTOUCHABLES, CASUALTIES OF WAR, CARLITO’S WAY, CARRIE and MISSION IMPOSSIBLE. “Brian De Palma’s filmography suggests one word: excitement. Few directors in movie history have generated the kinds of feelings found in Brian’s films,” said HIFF Co-Chairman Alec Baldwin. “Although he often worked with big stars and great writers, Brian is responsible for most of the excitement in his films.” 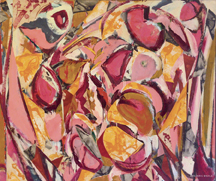 HIFF also announced the poster artist for the 2019 edition: Lee Krasner’s “Vernal Yellow” from her Solstice Series (1980, oil, collage on canvas, 150 x 178. Ludwig Collection). This painting, which uses cut-out fragments of figurative charcoal from the 1930s, as well as non-representational lithographs, was exhibited in 1980 at the Pace Gallery in New York.  The poster will debut later this Summer. A legend of the 20th century abstract expressionism movement and one of the artist pioneers who moved out East to the Springs in East Hampton, Lee Krasner’s work spans over 60 years. Currently, the Barbican in London is exhibiting the first solo retrospective of her work in Europe in over 50 years, and her work is included in a group show called “Painters of the East End” exhibiting at Kasmin Gallery in NYC this summer. Over the past 26 years, the Hamptons International Film Festival has grown immensely from its beginnings in 1993. The choice of Krasner’s “Vernal Yellow” for this year’s festival felt like a natural choice, as Krasner herself described her use of collage as way to revisit and refocus: “I go back on myself, into my own work, destroy it in some way and come up with a new thing… this seems to be a work process of mine… it’s a form of clarification… a form of growth.” “Celebrating local artists each year by commissioning or choosing their art for our official festival poster has been a hallmark of the Hamptons Film Festival since the very first year in 1993,” said HIFF Executive Director Anne Chaisson. “In looking at the array of talented artists who have donated their work — including Julian Schnabel, Eric Fischl, David Salle, Cindy Sherman, Bruce Weber, Bryan Hunt, Barbara Kruger, and John Alexander — we felt there was one grande dame whose work must be a part of this legacy: Lee Krasner.”

It was also announced that Toni Ross will be the recipient of this year’s “The Dick Cavett Artistic Champion Award.” This award was created in 2017 and first given to its namesake, Dick Cavett, to honor those in the creative arts who not only excel in their field, but who also support the arts and artists, particularly in film, television and related media. Ross’ paintings, installations, and sculptures have been showcased around the world and have left an indelible mark on the East End as one of its most prolific artists. Toni was the founding Chairman of the Board of HIFF in 1993 and for the ensuing five years, bringing to the organization a deep knowledge and passion for film, and a cultivation of artistic integrity outside of the fine arts. A film studies graduate of Wesleyan University, Ross was instrumental in establishing the Wesleyan Cinema Archives, where she remains on the Board of Trustees. Her career includes work with several film production designers, most notably Philip Rosenberg and Mel Bourne. As a social activist, Toni is also a founder of The Hayground School, where she has focused on the importance of diversity, removing barriers due to financial constraints and arts and culinary education.  Ross is also a restaurant entrepreneur, with five East End favorites including Nick & Toni’s, and a supporter of Guild Hall, OLA, and Planned Parenthood, among other non-profit organizations. In a prescient move, Ross founded and curates the biennial series “Women Artists: Reshaping the Conversation” in East Hampton.  Previous recipients of “The Dick Cavett Artistic Champion Award” include Cavett himself & Alan Alda. “Toni Ross has been an instrumental champion of the arts and the East End community where she works and lives.  She helped to launch the Hamptons International Film Festival and is the reason we are all here today. We look forward to honoring her at the festival in October,” said HIFF Artistic Director David Nugent. Additional information on HIFF’s summer programming, including the 2019 SummerDocs series, the year-round Now Showing series, and outdoor screenings in Southampton, can be found on the website. The Festival is pleased to welcome back returning Premiere Sponsor Audi, Lead Sponsors Delta and Altour, Signature Sponsors Netflix and JP Morgan, and Official Media Sponsors WNBC, The East Hampton Star, and Purist Magazine. For more information please visit www.hamptonsfilmfest.org