Mission Point on Mackinac Island, one of America’s most visited tourist attractions!

We were on the way to Michigan to celebrate our niece’s wedding with the family in Traverse City and Interlochen. But since no Michigan adventure will ever be complete for us without a visit to Mackinac Island, we decided that we would then continue our travels from T.C. to Mackinaw City and take the ferry over to Mackinac Island. This world-famous island, with its historic Grand Hotel and Mission Point Resort, Fort Mackinac, Arch Rock and colonial town where only horse drawn carriages and bicycles are allowed rates as one of Michigan’s, if not one of America’s premier tourist attractions. www.mackinacisland.org

Traverse City is where we officially kicked off the summer season with flying colors. At my husband’s request we held reservations at the historic Park Place Hotel that he had already admired as a young man, but couldn’t afford to stay at then. Located downtown T.C. our newly refurbished corner suite on the 7th floor granted us breathtaking sunrises and sunsets over Grand Traverse Bay. www.park-place-hotel.com We loved our stay, with dinner at the hotel’s restaurant Minervas and the eclectic cuisine at the hip Taproot Cider House, a local pub two blocks from our hotel, where ‘the kids’ held a pre-wedding celebration. www.taproottc.com —Postcard perfect pictures on top of the ever-amazing Sleeping Bear Dunes and a celebration of the union of a man and a woman perfect for each other made our weekend in T.C. complete.

After a scenic 2-hour drive, we finally reached Mackinaw City and stopped for our obligatory fried White Fish lunch at Darrow’s Family Restaurant, definitely worth finding this off the beaten path local eatery. www.darrowsrestaurant.com — When we got in line to board Sheplers Ferry, Mr. Shepler Sr. the founder was at the ticket stand and welcomed us personally. Owned and operated by the Shepler family since 1945, it still thrives today as one of Michigan’s longest operating family businesses. www.sheplersferry.com

As much as Montauk is America’s most quintessential fishing and beach town, Mackinac Island is America’s most quintessential 19th century island town. Home of historic Fort Mackinac and famous ‘Arch Rock’, the island is also the location of the famous film ‘Somewhere in Time’. For almost forty years people come to Mackinac Island to remember the 1980 movie ‘Somewhere in Time’, filmed with Christopher Reeve and Jane Seymour at the Grand Hotel, Mission Point, the Round Island lighthouse and a gazebo located behind the Fort.  Mackinac Island is frozen ‘somewhere in time’ and therefore no cars are allowed.

Mackinac Island is about 8 miles in circumference and 3.8 square miles in total area. It is located in Lake Huron, at the eastern end of the Straits of Mackinac, between the state of Michigan’s Upper and Lower Peninsulas. The island was home to an Ojibwa settlement before European exploration began in the 17th century. It served a strategic position as a commerce center of the Great Lakes fur trade. This led to the establishment of Fort Mackinac on the island by the British during the American Revolutionary War. It was the site of two battles during the War of 1812. According to the 2010 US Census, the island had a year-round population of fewer than 500 and can be reached by private boat, ferry, small aircraft, and in the winter, by snowmobile over an ice bridge. 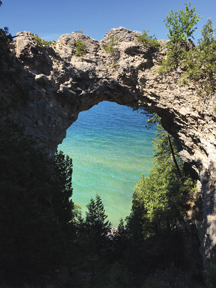 Of course I had come mostly for the film ‘Somewhere in Time’ and The Spa at Mission Point but my husband wanted to discover historic Fort Mackinac and experience the amazing views through Arch Rock, a natural limestone arch formed during the Nipissing post-glacial period. Arch Rock resides on Lake Huron shoreline 146 feet above the water. The Native Americans saw Arch Rock as a place of numinous power, and told many stories and legends about it. To our surprise we found that Arch Rock is located within walking distance from Mission Point Resort, our domicile for a couple of nights. We were here just a couple of years ago when parts of this historic hotel were still under construction and delighted to stay now in one of these completely redone beautiful virgin suites in the Straits Lodge. One of Mission Point’s most popular suites, the Hot Tub Junior Suite turned out to be a romantic hideaway for us. Featuring a king size bed, a private 300 square foot patio and deck with a full size canopied hot tub. As a matter of fact all of the rooms and suites at Mission Point Resort have now been updated and are redone in classy–cool color schemes, custom made Detroit Denim throw pillows, vintage posters, subway-tiled bathrooms, vanity, a wet bar, and a sitting area with comfy-cool leather chairs and everything else a couple of seasoned travelers could possibly imagine.

In addition to the wide variety of activities offered on the island, Mission Point also features a couple of excellent water-front restaurants, an 18-hole putting course, a Lakeside Spa & Salon, the island’s only full-service spa and salon, the Mackinac Arts Council and art gallery, a fitness center, a tennis court, pool, Admiral Dave’s arcade, complimentary Kids Club, and a fleet of branded Mission Point bicycles created in collaboration with Detroit Bikes available at its on-site bike rental facility. With these activities, plus multiple onsite eateries and 241 rooms in a variety of arrangements, couples and/or families of all sizes will find exactly what they like.

The name Mission Point is a reference to the property’s history. In the early 1820s, a Protestant missionary made an effort to educate and care for the Ojibwa children who lived on the island and in the region. A few years later, one of the first Protestant churches in the Midwest was built here and named Mission Church, securing the name of Mission Point and the Mission district for this area of the island. Later, in the 1950s an evangelistic group committed to spreading love and sharing, settled on Mission Point. Known as the Moral Re-Armament Society, they constructed the Main Lodge and other facilities on the grounds, including Straits Lodge. After serving as a hotel, resort, and conference center for 30+ years, Mission Point was purchased in 2015 by the Ware family, who began the most expansive renovation believed to ever have taken place on this island.

Contrary to common belief, Mission Point is also the place where much of the famous movie “Somewhere in Time” was filmed, besides at the Grand Hotel. At the time of filming, Mission Point Resort was still Mackinac College. Today, guests can watch feature films here in the movie theater at Mission Point and sit in the very same seat that Richard Collier (Christopher Reeves) sat in while watching Elise (Jane Seymour) perform. An engraved plaque designates it as Christopher Reeves’ seat and my husband sat right there and when he drew me closer for a kiss I whispered in his ear: “There is so much to say… I cannot find the words. Except for these: I love you.” You wanna bet that I’d watched the film already several times? www.missionpoint.com 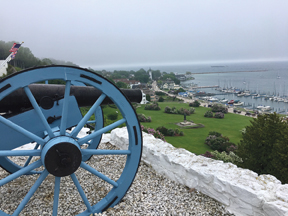 Later we took a horse drawn carriage taxi for a ride up to Fort Mackinac, a former British and American military outpost garrisoned from the late 18th century. The British built the fort during the American Revolutionary War to control the strategic Straits of Mackinac between Lake Michigan and Lake Huron, and by extension the fur trade on the Great Lakes. The British did not relinquish the fort until fifteen years after American Independence. Fort Mackinac later became the scene of two strategic battles for control of the Great Lakes during the War of 1812. During most of the 19th century, it served as an outpost of the United States Army. Closed in 1895, the fort has been adapted as a museum on the grounds of Mackinac Island State Park. Here we witnessed a live demonstration of cannon firings and got to talk with the re-enactors and ask questions about life at the fort when it was an active post. www.mackinacparks.com/parks-and-attractions/fort-mackinac/